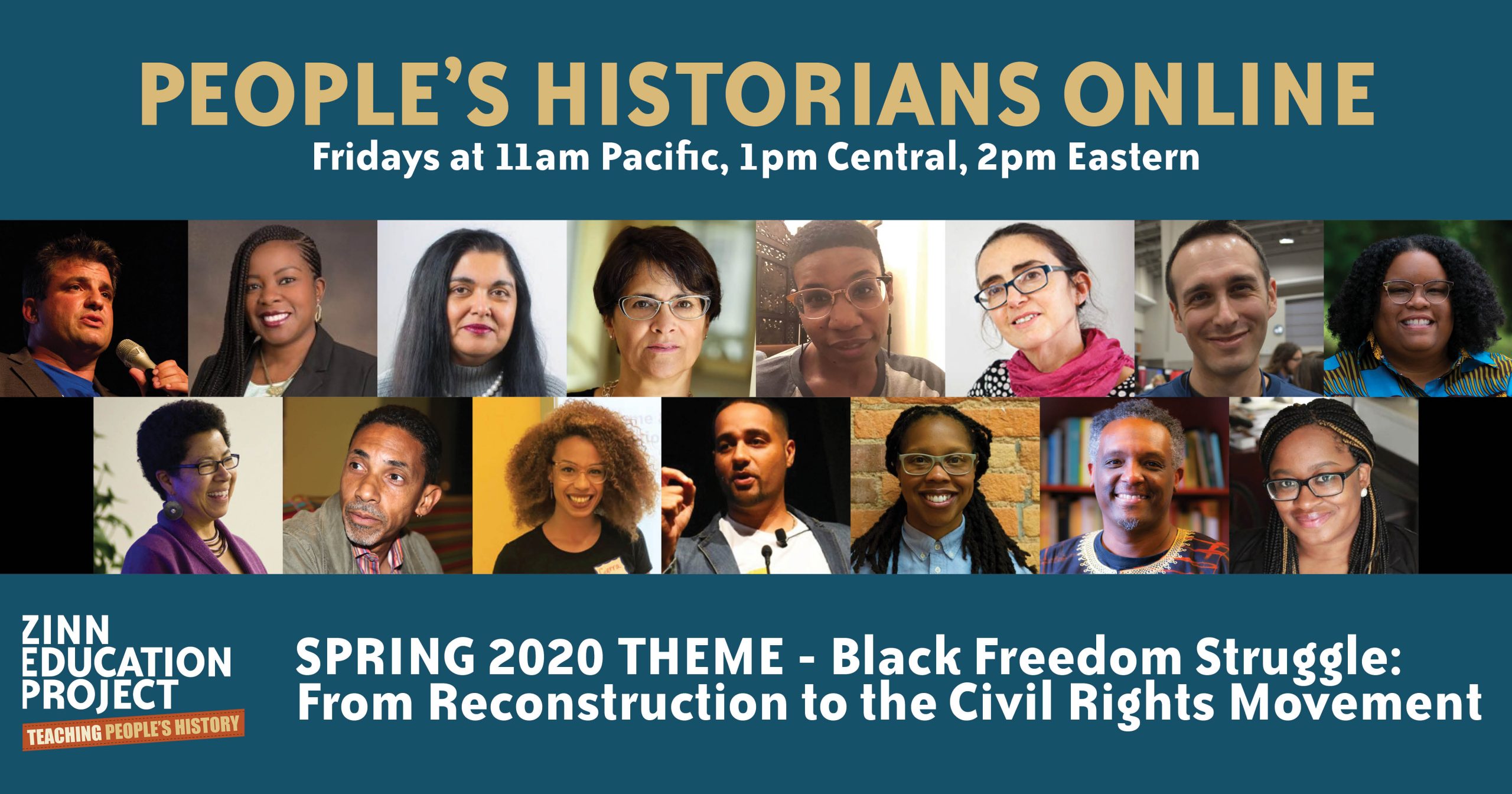 This is such a wonderful series — content-wise and soul-feeding.

This is one of the best professional developments I have ever been to, hands-down. I am so grateful. This series is giving me hope in this difficult time.

Phenomenal series so far. Even more important during our current situation, as people are engaged and able to see each other. I’ve been here every Friday and look forward to these talks.

These comments are from two of the hundreds of teachers and students who have attended our People’s Historians Online mini-classes while school buildings are closed. Author Jeanne Theoharis suggested the series and offered to host the initial sessions in conversation with high school teacher and Rethinking Schools editor Jesse Hagopian.

Fridays have become a time to look forward to learning through stories about people’s history, to meeting other educators, and to finding a road map forward in the midst of this pandemic. As one participant said, “Thank you for getting us together and giving me hope that we are not alone, and that we can think and act ourselves out of this pandemic.”

The Zinn Education Project staff, in collaboration with Jeanne Theoharis, have scheduled more sessions for May and June. Read below about our sessions to date and sign up for upcoming ones.

Each link below includes highlights from the session, a list of the resources recommended by the presenters and participants, participant reflections, and a full video recording.

March 27 and April 3: The Rebellious Life of Mrs. Rosa Parks Based on Jeanne Theoharis’s book of the same name, this session introduced participants to Rosa Parks’ activism prior to the Montgomery bus boycott, her trip to the Highlander Folk School, and the decades of her life challenging racism in the North after the boycott.

April 17: The Civil Rights Movement in the North Participants in this session learned that the biggest civil rights demonstration of the 1960s was in New York City. They also heard about struggles for desegregation in Los Angeles, Milwaukee, and Boston.

May 22: Black Left: 1930s to the Early 1950s Robin Kelley in conversation with Cierra Kaler-Jones.

May 29: Black Feminist Organizing: 1950s to the 21st Century Barbara Ransby in conversation with Jesse Hagopian.

June 5: Examining the Historical Roots of the 2020 Rebellion Keisha N. Blain and Jesse Hagopian addressed the role of police throughout U.S. history, the connection between lynching and police brutality, and the importance of highlighting stories of resistance, particularly by women of color in the fight for human rights.

June 12: Reconstruction and Issues of Citizenship, Suffrage, and Movement Building in the 19th Century Martha Jones in conversation with Tiffany Mitchell Patterson addressed the themes of our campaigns to Teach Reconstruction and to teach about voting rights on this 150th anniversary year of the 15th Amendment and an election year.

June 19: Reconstruction and Juneteenth Greg Carr in conversation with Jessica Rucker. They discussed how Juneteenth is one of many days where African Americans celebrate being “freed” but still not “free” and how the times we are in today could be considered a third Reconstruction or a second Founding.

June 26: A History of Rebellions Jeanne Theoharis and Jesse Hagopian discussed various rebellions in U.S. history — including what they have in common and how they differ from current events.

Each session or mini-class is for 75 minutes and begins at 11am Pacific, 1pm Central, and 2pm Eastern. There are breakout rooms for 12 minutes about half-way through the session to allow participants (in small groups of five or six) to meet each other, discuss the content, and share teaching ideas. We’ve designed the sessions for teachers and other school staff, however, parents, students, and others are welcome to participate. ASL interpretation is available on request.

The session format is as follows:

Participants will need access to Zoom (on computer or phone). Register below for any or all of the sessions above. A day before the session, you will receive a confirmation, the Zoom link (with a password), and an optional pre-reading.

These sessions are made possible thanks to support from the Communities for Just Schools Fund and individual donors.

Please add your support and make a donation so that we can continue to offer people’s history lessons, resources, workshops — and now online mini-classes — for free to K-12 teachers and students. We receive no corporate support and depend on individuals like you.