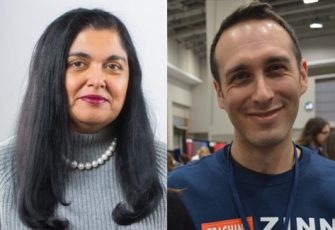 On July 10, the weekly People’s Historians Online mini-class featured a conversation with historian Manisha Sinha and high school teacher Adam Sanchez about the abolition movement and Reconstruction. The session addressed themes of our campaign to Teach Reconstruction.

Sinha stressed that the abolition movement should not be taught as a collection of individuals, but instead as a radical social movement. Here are just a few reflections from participants on what they learned. (More reflections at the end of this page.)

I learned about the magnitude of the abolition movement, which made me think more about how I’ve been taught it through the stories of a few huge figures. Another takeaway is that what is missing from subsequent social movements (post-Reconstruction) is a clear commitment to Black equality.

I need to show how large the abolition movement is. If I stress the involvement of many (including small towns, etc.), my students will be better able to see themselves in the movement and act today.

The large number of people involved in the abolition movement and their role before and after Civil War, including moving forward on schooling and economic equity after emancipation.

Here are highlights of the session from the tweet thread by high school teacher and Zinn Education Project team member Ursula Wolfe-Rocca.

Adam: Talk a bit about Black abolitionists in particular.
Dr. Sinha: I wanted to show how in many cases, Black abolitionists were the *vanguard* of the movement, making sure the goals include not just an end to slavery, but equality & radical democracy.

Question from the chat box: Tell us about David Walker & his Appeal to the Colored Citizens of the World. https://t.co/GIDT6MMgX1

The movements that build themselves in the mold of Black activism do not return the favor: they compromise on Black freedom again & again. Let’s learn this lesson: The fight for Black equality has to be central to any reimagining of U.S. democracy.

This was so wonderful.

The good news? Most of them are in her book, which you can read! https://t.co/sLu67TpnPM

Listen to an audio recording of the session.

Responses to the question: What was the most important thing (story, idea) you learned today and what may you do with what you learned?

A crucially reinforced idea of abolition as a long, radical social movement, one with deep roots that trace back to pre-American Revolution (petitions) that endures to today, what Dr. Sinha or Adam referred to as the “current rebellion”. Banking on resonance of present day abolitionist movements (abolish prisons, abolish police, abolish schools, abolish racism in all its forms) to engage student curiosity about its long backstory.

I learned that the abolitionist movement was a large movement that spanned the country, not limited to a small radical group. Also, re-framing the idea that it wasn’t confined to a period but is a movement that is not finished! The resources are SO helpful for my history classes!

It was truly significant to learn about how instrumental Black women were in the abolitionist movement. I plan on bringing in narratives from abolitionists and the Reconstruction era into my ELA course.

Importance of Black abolitionists … I will focus on them for my teaching of U.S. history.

That enslaved people were a large part of the abolition movement.

To continue to interrogate the racial ideas of everyone, here, more specifically of abolitionists. I will mention the Theodore Parker example as a way of saying “we are all — even dyed in the wool abolitionists — always, trying to purge ourselves of the inheritance of racial ideas.”

I learned more about the broader MOVEMENT of abolition — reminded me of Jeanne Theoharis’ comment about the “tendrils that lead up to a moment.” It was a good reminder not to stick to the same names that always get mentioned but to intentionally seek out the lesser known people involved in these movements.

I learned a LOT today! I appreciated the focus on African American abolitionists and the strategy/organizing/creativity of the movement! That Black abolitionists were establishing the basis for Reconstruction with emancipation leagues, etc. and also anticipating the problems of Reconstruction. The story of Parker was also really compelling/stands out as something I want to study in more depth. And I “met” Frances E. W. Parker! I can’t wait to read her work!

The history of abolition is a continuum that goes to the present! Some abolitionists have said they were “done” had achieved their goals at different points, and some (the more radical) keep going!

Did not realize the size/scope of the movement. Will definitely re-frame teaching!

That the abolitionist movement was larger than discussed in most resources.

SO much to take back to my 5th graders! Distinction between antislavery and abolition movement; failure to center equality for BIPoC as Achilles heel of progressive movements; focusing on movements rather than individuals (pillar of white supremacy); pushback of Black abolitionists on white paternalism and meetings as opportunities for interracial debate, creative conflict, and growth — development of ideologies over time — model of Theodore Parker saying he was wrong!

Role of small abolitionist groups in many towns and the over all huge numbers of participants, especially as students grapple with what their role can be in our modern movements, reminding them that there is nothing unimportant in standing up for rights and what you believe in, small, big, local, national — all roles are important.

I also was reminded about how many individuals we know only the one quote from and learning more about their whole story rounds out their contributions and models how to fight for students.

Critiques of the PBS series The Abolitionists. I used to show it. If I do so again, I am better prepared to engage students in critiques of it.

Loved listening and then being able to process in breakout groups and then come back.

Always wish these could be longer.

I love the format I have suggested it to many other groups that I have been working with.

I like the overall structure of the zoom.  I’d like more time in the small groups. We just got started when time ended.

The breakout rooms could use maybe 5 – 10 more minutes.

Wonderful presenter, the breakout group was great but too short. Our facilitator was fabulous. I think teachers are desperate for interaction with other teachers! The chat box is so distracting, especially when one participant, as happened today, is using bad faith arguments to comment on the presenter and purposefully misunderstanding the information being presented. I did not allow myself to reply, but I couldn’t focus as the comments continued to come in.

Fantastic format! Although I always wish for more time in the breakout room!

Format is great. Twelve minutes is too short in breakouts. Or maybe have two shorter breakouts — one for each question.

This was my first session with a small group facilitator and while all my other groups have had great discussions, it was nice to have a leader who so openly and kindly invited conversation.

The format of scholarly speaker in conversation with a classroom teacher facilitator really works well to focus the presenter’s amazing and vast knowledge and insights with questions that will come up in middle/high school curriculum planning. Having ideas about where to attach these new people and stories into my required curriculum is so helpful in planning how to pass on all the inspiring things I’m learning.

Everything, as usual, was wonderful! I have so appreciated these Friday sessions. They’ve really been a bright beacon of community and learning in this dark time.

Appreciate what you are doing to help us change the narrative regarding what is being taught in schools.

Thank you. This series has been incredible for me as a learner and a teacher.

Y’all are amazing. I appreciate your intellectual, emotional, spiritual labor with this work. Gratitude.

Thank you! I’m looking forward to going back to watch sessions I missed, and I hope there will be more.

I say this every week, I think. This opportunity every week has been so powerful for me as a learner, a teacher, and a person. You have created a space where the facts and the history support solidarity on a daily basis. I have been truly blessed and in some ways, carried through the last few months by the community that has gathered here. Deep thanks!

Thank you, thank you, thank you to all the presenters, leaders, facilitators and the Zinn Education Project team for making this series. It has been a highlight of the spring/summer and so helpful for keeping motivated and connected to amazing educators through this period of adapting to our new reality of distance learning.

I sincerely hope these webinars will continue. I have looked forward to these each week, and they have provided an incredible sense of community and purpose in these difficult times. Thank you to everyone involved for making these happen!

Manisha Sinha did an excellent job presenting the early and continuing history and components of abolition through the voices of abolitionists, both familiar and perhaps those relatively unknown. She also showed the parts some abolitionists played in their work, political and social, after slavery had ended, leading up to and including Reconstruction. Commentary from Adam Sanchez, as well as his sharing suggestions for further reading and other sources, was enlightening and inspirational. Having read some of his extensive writing, it was great to see and hear his views and input, as well.

Manisha Sinha is the James L. and Shirley A. Draper Chair in American History at the University of Connecticut and a leading authority on the history of slavery and abolition and the Civil War and Reconstruction. She is the author of The Counterrevolution of Slavery: Politics and Ideology in Antebellum South Carolina and The Slave’s Cause: A History of Abolition; has appeared on Democracy Now!; and is an advisor for the Zinn Education Project Teach Reconstruction campaign.

Adam Sanchez teaches at Abraham Lincoln High School in Philadelphia. He is a Rethinking Schools editor, a Zinn Education Project teacher leader, and is also editor of Teaching a People’s History of Abolition and the Civil War.