On December 6, we hosted Jarvis Givens, author of Fugitive Pedagogy: Carter G. Woodson and the Art of Black Teaching, in conversation with Jesse Hagopian and Cierra Kaler-Jones. Givens’ work details the long assault on Black education that occurred from the period of enslavement through the life of one of the founders of the Black studies tradition, Carter G. Woodson.

Tonight was a pleasure. The depth and breadth of knowledge that Dr. Givens as well as Jesse Hagopian and Cierra Kaler-Jones had was impressive and inspiring. Thank you!

I learned so much. I think that Tessie McGee’s story really influenced me to look more into it. And the fact that people were being fired for teaching the truth. We must teach the truth.

I love this. I feel like this will help me to solidify my understanding of the loss of historical truth by our society because they have shut out BIPOC communities. Thank you.

For him one of the key things that has been missing is a meaningful engagement with the LONG history of Black teachers struggling to challenge racial domination in American schools. Anti-racist teaching isn’t novel!

Jesse says that the Givens’ concept of “fugitive pedagogy” as a lens for analyzing schooling was “like a key unlocking the truth for me.” He asks Dr. Givens to elaborate on the concept & share examples (current & historic) of attacks on Black learning.

The school board expressed “horror & surprise that such a work should have crept into *our* Negro schools.” The principal of the school was forced to resign, copies of the books seized. Sound familiar?

Givens: Scripts of resistance were central to these texts, some of which were written by formerly enslaved people themselves. We see the Haitian Revolution! We see maroon communities in Suriname & Jamaica! The fugitive slave was a folk hero in these texts.

Givens says there are real limitations to the idea of “antiracist” education. Anything that is only defined by what it is against will never get us to the promised land! Givens says that’s why he’s so enthralled with stories of fugitives stealing away to create something new.

When that book — Black Reconstruction — comes out a couple years later, there are reviews written by teachers in their association journals. So this relationship raises questions about why some are so committed to the rigid boundaries between the academy & K-12.

Here are many of the lessons, books, articles, videos, and more recommended by the presenters and also by participants.

The TRUE impact that Dr. Carter G. Woodson had on education!!!

Fugitive Pedagogy was a new term for me today. It was nice to hear from Dr. Givens about what it means and then apply it to what I’ve learned, or perhaps have not learned, throughout my education. These are topics and ideas that deserve attention in the classroom.

The story of McGee needing to switch between the prescribed curriculum and what needed to be taught.

The specifics about history that allows me to understand today. The role of fugitive slaves in curriculum. Thanks also for the mention of the “communism” references: today’s “socialism”  labels. Reframing the Du Bois and Washington debate.

The concept of exercising fugitive pedagogy — simultaneously infuriating that history has been erased from “mainstream” classrooms AND invigorating that there’s a strong, vibrant history of resistance and subversion.

Fugitive pedagogy and how it impacted Black teachers. I am amazed by Dr. Carter G. Woodson’s story and how he was a trailblazer. The history of Black educators and how they went through to ensure that they are educated are very important. Their history needs to be told, and the truth needs to be shared with people. I learned a new term: intellectual surveillance.

Private capital and intellectual surveillance being a part of the same struggle. As well as the beautiful historical lineage of Black teachers who engaged in a process of ‘imagining’ with their students (ours is not only a history of resistance or countering white supremacy).

I think that something that struck me and made me think about my teaching was when Dr. Givens talked about the narrative around desegregation of schools and centering the white schools, while not recognizing the amazing contributions of teachers at Black schools. I need to center my narrative around that idea and talk more about the success of Black schools in segregated times.

The limitations of the focus on antiracist pedagogy. And the fact that the previously enslaved wrote text books. I did not know. The concept itself of fugitively and as applied to the practices of Black educators.

Black literacy becoming criminalized. Hearing Dr. Givens speak the history and connect Dr. Woodson’s teachers to the project of teaching for liberation today, stemming from the rich history of Black teachers! So much fire this evening.

I am going to be able to apply many of the concepts I learned today to my Ethnic Studies teaching, which is focused on histories of schooling. Also I teach History of the Americas and that brief bit on maroon societies across the Americas sparked a way for me to talk about resistance outside of Haiti and the U.S.

It will influence the framing of professional development sessions with my history team and lesson planning.

I will read Dr. Givens‘ book, and make sure to explore it with my students next semester. I needed to reframe my considerations of Woodson outside the BHM narrative. This was so helpful in giving me the inspiration to dig deeper — thank you!

Keep reading, keep learning more. I will also bring this knowledge back to my team tomorrow. I plan to propose “Fugitive Pedagogy” as our next team book study.

I am currently working on a model curriculum for 5th Grade the MA Dept of Education.  Unit 5.5  of the Frameworks focuses on Black History from Reconstruction to the the Present. Dr. Jarvis’ work will be instrumental as I shape these lessons which will be open source for all educators in Massachusetts.

Teach about Freedom Schools and make comparisons to the banning of CRT today.

As a pre-service teacher, I am looking forward to challenging dominant narratives found in the state of Texas’ curriculum. I am still preparing ideas for how this can be done, but I really want to focus in on students identities in my classroom and have them work as co-creators of the classroom curriculum. I have faith that their minds and hearts will fuel the creativity needed to teach the truth, and challenge dominant biased narratives.

I plan to read the Carter G. Woodson picture book tomorrow, and then use that as a catalyst for moving forward with conversations about his work, the pushback that he received, why they think that was, and then move on to whatever our conversations make most logical. I work with first through fifth-grade students, so the conversations and next steps may vary by group. I am awaiting my copy of Fugitive Pedagogy & I know that this will continue to impact my practice. I’m looking forward to sharing about tonight with my T4BL study group members.

University teacher: I got so many resources from the chat and specific examples and framing from Dr. Givens. I already texted a few of my colleague co conspirators about ideas for refusing some of what we are asked to do in teacher education.

I hope to share this information formally and informally with younger teachers, especially Black teachers, to encourage them to remain in the profession.

This is making me have hope about returning to teaching — about what I might still be able to do.

Thank you so much for these opportunities for on-going professional development.

Great hosts and knowledge as usual….#ScholarsOfThePractice

Jarvis Givens is an assistant professor at the Harvard Graduate School of Education and a faculty affiliate in the university’s department of African & African American Studies. He studies the history of American education, African American history, and the relationship between race and power in schools.

Cierra Kaler-Jones is a social justice educator, writer, and researcher based in Washington, D.C. Her research explores how Black girls use arts-based practices as mechanisms for identity construction and resistance. She is the director of storytelling at the Communities for Just Schools Fund. 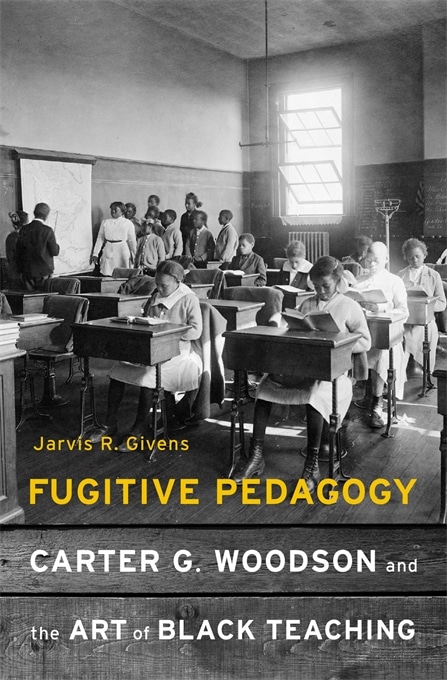 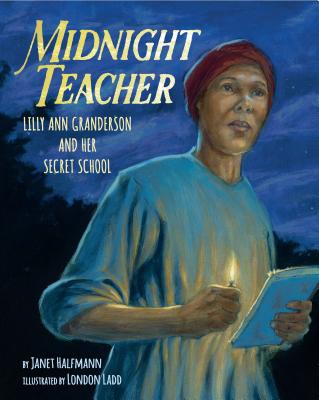 Picture book. By Janet Halfmann. Illustrated by London Ladd. 2018. 40 pages.
Tells the story of Lilly Ann Granderson, an enslaved woman who taught hundreds of people in Kentucky and Mississippi to read.