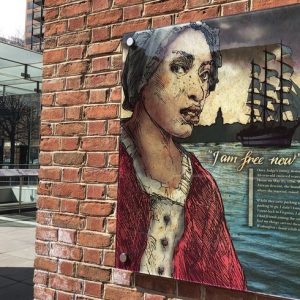 On May 21, 1796, Ona “Oney” Judge fled her enslavement to Pres. George Washington, while the first family resided in Philadelphia, then the nation’s temporary capital.

Yes, Washington was an enslaver. He was one of 12 presidents in U.S. history (1 out of 4) who owned and sold people. Pennsylvania began to abolish slavery gradually in the 1780s but Washington was able to keep enslaved members of his household in Philadelphia by finding loopholes in the law. (For example, state law said that enslaved individuals brought to Pennsylvania and kept there would be free after six months, so Washington rotated people between Mount Vernon and Philadelphia every few months to ensure none of them could legally claim their freedom.)

Judge, in her early 20s, had learned that the Washingtons planned to transfer her to Martha Washington’s granddaughter, Elizabeth Parke Custis, as a wedding gift.

Decades later, Judge recalled her escape in an 1845 interview with an abolitionist newspaper in New Hampshire, where she had lived in freedom for the rest of her long life:

Whilst they were packing up to go to Virginia, I was packing to go, I didn’t know where; for I knew that if I went back to Virginia, I should never get my liberty. I had friends among the colored people of Philadelphia, had my things carried there beforehand, and left Washington’s house while they were eating dinner. 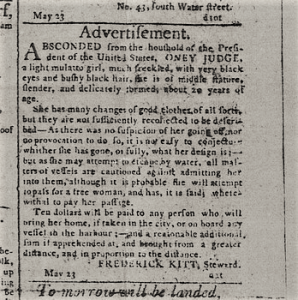 An advertisement in the Philadelphia Gazette and Universal Daily Advertiser offers a bounty of $10 or more for Oney Judge.

Judge, who had worked as Martha Washington’s personal attendant, was smuggled aboard The Nancy, a sloop that took her to liberty in Portsmouth, New Hampshire. “Judge knew that the moment she walked out of the President’s Mansion that she would become a hunted woman,” historian Erica Armstrong Dunbar wrote in Never Caught: The Washingtons’ Relentless Pursuit of Their Runaway Slave, Ona Judge (2017). “She would transform from a trusted house slave for the most powerful American family to a criminal, guilty of stealing her own body away from her owners.” 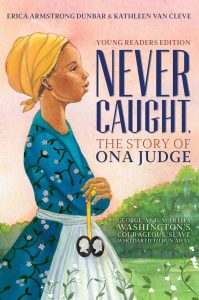 Recommended for middle school and above.

Upon discovering that Judge had fled, Washington had an aide post newspaper advertisements for her recapture. A May 23, 1796, advertisement includes the following:

Absconded from the household of the President of the United States on Saturday afternoon, ONEY JUDGE, a light Mulatto girl, much freckled, with very black eyes, and bushy black hair — She is of middle stature, but slender, and delicately made, about 20 years of age.

Washington offered a $10 reward, which equated to the cost of a barrel of flour at the time, according to Dunbar.

As for Judge, in 1797 she married John Staines, a free Black sailor, with whom she had three children. She worked as a seamstress and avoided at least two attempts by Washington’s agents to capture her in New Hampshire. Judge died February 25, 1848, at about age 75.

A historical marker recognizing Ona Judge—who fled enslavement by George Washington and escaped to freedom—was part of this contest. The marker was erected in Mt. Vernon. Ona Judge was nominated for recognition by elementary school students in Fairfax, Va. and their teacher. ✨ pic.twitter.com/KMuL6OfjHl 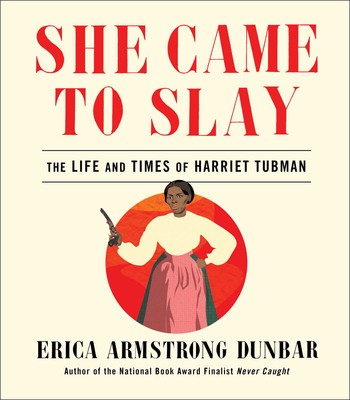 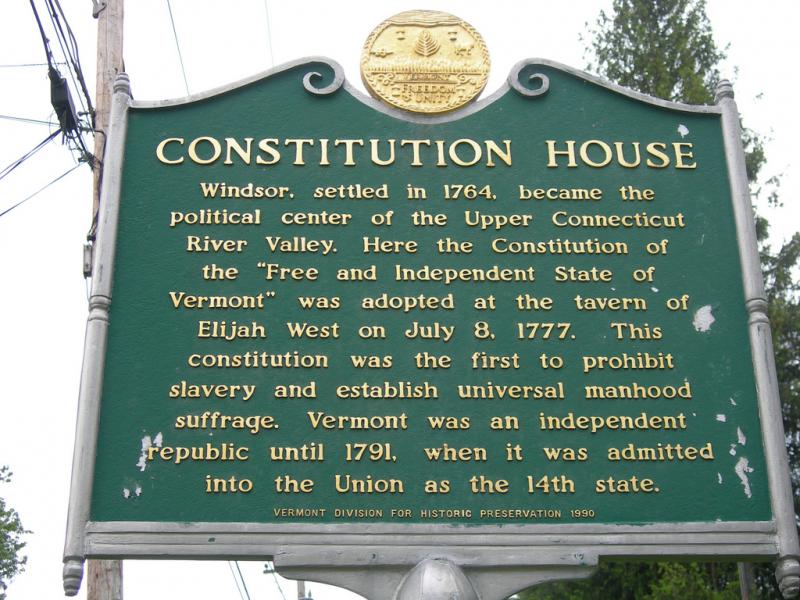