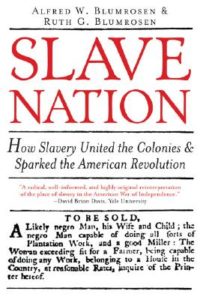 This carefully documented, chilling history presents a radically different view of the profound role that slavery played in the founding of the republic, from the Declaration of Independence and the American Revolution through the creation of the Constitution. The book begins with a novel explanation about the impact of the Somerset Case on the founding of the republic.

In 1772, a judge sitting in the High Court in London declared slavery “so odious” that it could not exist at common law and set the conditions which would consequently result in the freedom of the 15,000 slaves living in England. This decision eventually reached America and terrified slaveholders in the collection of British colonies, subject to British law. The predominantly southern slave-owners feared that this decision would cause the emancipation of their slaves. It did result in some slaves freeing themselves.

To ensure the preservation of slavery, the southern colonies joined the northerners in their fight for “freedom” and their rebellion against England. In 1774, at the First Continental Congress John Adams promised southern leaders to support their right to maintain slavery. As Eleanor Holmes Norton explains in her introduction, “The price of freedom from England was bondage for African slaves in America. America would be a slave nation.”

Thomas Jefferson relied on this understanding when carefully crafting the stirring words of the Declaration of Independence. In 1787, about the time Benjamin Franklin proposed the first affirmative action plan, negotiations over a new Constitution ground to a halt until the southern states agreed to allow the prohibition of slavery north of the Ohio River. The resulting Northwest Ordinance created the largest slave-free area in the world. Slave Nation is a fascinating account of the role slavery played in the foundations of the United States that traces this process of negotiation through the adoption of Northwest Ordinance in 1787, and informs our understanding of later events including the Civil War and the Civil Rights Act of 1964. [Publisher’s description.]

Features an introduction by Congresswoman Eleanor Holmes Norton, and an in requiem poem by Barbara Chase-Riboud.

Alfred Blumrosen is the Thomas A. Cowan Professor of Law Emeritus at Rutgers University in New Jersey, specializing in Labor and Employment law, with a long history in enforcement of Civil Rights.

The late Ruth Blumrosen was an adjunct professor of Law at Rutgers Law School, who did groundbreaking work on equality of the sexes, especially in connection with wages.

Teaching Activity. By Alan J. Singer. Rethinking Schools.
How a teacher and his students organized a tour of the hidden history of slavery in New York.

Website.
A companion site to the PBS documentary on the origins and legacy of American slavery, including episodes on the Revolutionary and Civil Wars.

Book – Non-fiction. By Anne Farrow, Joel Lang and Jenifer Frank. 2005. 304 pages.
Challenges the misconception that only the South was involved in or profited from slavery.

One comment on “Slave Nation: How Slavery United the Colonies & Sparked the American Revolution”