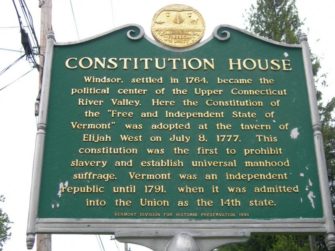 The Constitution House historic marker in Windsor, Vermont, highlights the prohibition of slavery in 1777.

On July 2, 1777, Vermont became the first colony to abolish slavery when it ratified its first constitution and became a sovereign country, a status it maintained until its admittance to the union in 1791 as the 14th state in the United States. Read the selection from Chapter I of Vermont’s 1777 constitution which abolishes slavery below:

no male person, born in this country, or brought from over sea, ought to be holden by law, to serve any person, as a servant, slave or apprentice, after he arrives to the age of twenty-one Years, nor female, in like manner, after she arrives to the age of eighteen years, unless they are bound by their own consent, after they arrive to such age, or bound by law, for the payment of debts, damages, fines, costs, or the like.

Harvey Amani Whitfield, author of The Problem of Slavery in Early Vermont, 1777-1810, writes that slavery in Vermont was gradually phased out over a period of multiple decades. Additionally, the National Museum of African American History and Culture (NMAAHC) staff write in “Vermont 1777: Early Steps Against Slavery” that even though “Vermont, Rhode Island and Connecticut abolitionists achieved laudable goals, each state created legal strictures making it difficult for ‘free’ blacks to find work, own property or even remain in the state” and that Vermont’s 1777 constitution’s “wording was vague enough to let Vermont’s already-established slavery practices continue.”

Even when slavery was finally outlawed in the Northern states, their economies were fully intertwined with the institution of slavery. Every occupation and institution from barrel makers to bankers to insurance companies to the textile industry and many more were connected to slavery. The authors of Complicity: How the North Promoted, Prolonged, and Profited from Slavery describe how New York City mayor Fernando Wood pushed for his city’s secession from the Union during the Civil War because “the lifeblood of New York City’s economy was cotton, the product most closely identified with the South and its defining system of labor: the slavery of millions of people of African descent.” Read more about how northern states profited from slave labor even after they had abolished slavery in Complicity and find other teaching materials below.