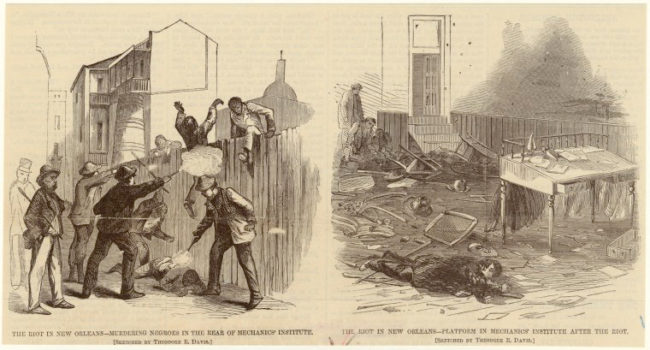 As explained in “An Absolute Massacre: The 1866 Riot At The Mechanics’ Institute“:

The parade of marchers had thwarted off the mob on the other side of Canal, but once they made it to the Mechanics’ Institute, where the convention was taking place inside, they were beset by more violence. A gang of white supremacists and ex-Confederates attacked. Fire sirens went off, signaling police to attack. They were sent by the mayor.

“There was panic because the police and firemen, armed, surrounded that building and began advancing,” says [Caryn Cosse] Bell. “The attack was premeditated. Lead police chief Harry T. Hayes, what he was doing at the time was recruiting policemen from Confederate veterans. They stormed in and started shooting, chasing people down the street.”

The brutal attack led to a total of 150 casualties, including 48 deaths (44 African Americans and three white Radical Republicans).

The New Orleans and Memphis riots strengthened the argument by Radical Republicans (a faction in the Republican Party) that President Johnson’s Reconstruction plan was insufficient and greater protection of African Americans was needed.

Read more at Black Past.org. Find resources below to Teach Reconstruction and to teach about the long history of the fight for voting rights.