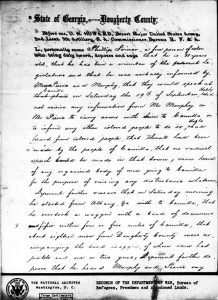 The Camilla Massacre took place on September 19, 1868 near Albany, Georgia. The massacre was one of many acts of repression carried out by white supremacists during the Reconstruction era to roll back advances in civic, economic, and human rights for African Americans.

Here is a description from the Georgia Encyclopedia.

In early September, the Georgia state legislature expelled twenty-eight newly elected members because they were at least one-eighth black. Among those removed was southwest Georgia representative Philip Joiner.

On September 19, Joiner, along with northerners Francis F. Putney and William P. Pierce, led a twenty-five-mile march of several hundred Blacks and a few whites from Albany to Camilla, the Mitchell County seat, to attend a Republican political rally.

Mitchell County whites, however, were determined that no Republican rally would occur. As marchers entered the courthouse square in Camilla, whites stationed in various storefronts opened fire, killing about a dozen and wounding possibly thirty others.

As marchers returned to Albany, hostile whites assaulted them for several miles.

Read more at “Camilla, GA: Political Rally and Massacre” in Black and Education. Find an extensive collection of primary documents about Camilla at the Digital Library of Georgia. Read about more massacres in U.S. history.

Teachers and students in the area of Camilla (near Albany), Georgia: Please consider adding this site to the Make Reconstruction History Visible map and advocating for a marker for the Camilla Massacre. As of this posting (9/19/2021), most major “on this day in history” series do not include this anniversary. Students can help ensure this event is not hidden in history.

Find resources below to Teach Reconstruction and to teach about voting rights and Reparations.