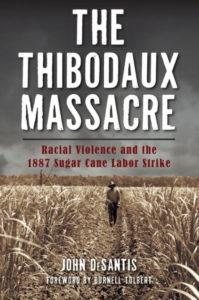 On November 23, 1887, the Louisiana Militia, aided by bands of prominent white citizens, shot and killed 30 to 60 unarmed striking Black sugar workers in what became known as the Thibodaux Massacre.

Black Louisiana sugarcane workers, in cooperation with the racially integrated Knights of Labor, had gone on strike at the beginning of November in 1887 over their meager pay issued in scrip, not cash. The scrip was redeemable only at the company store where excessive prices were charged.

Much of this history was documented through research by John DeSantis, author of The Thibodaux Massacre (History Press). The story of how he learned of and found accounts of the massacre in pension records is a history lesson in and of itself. 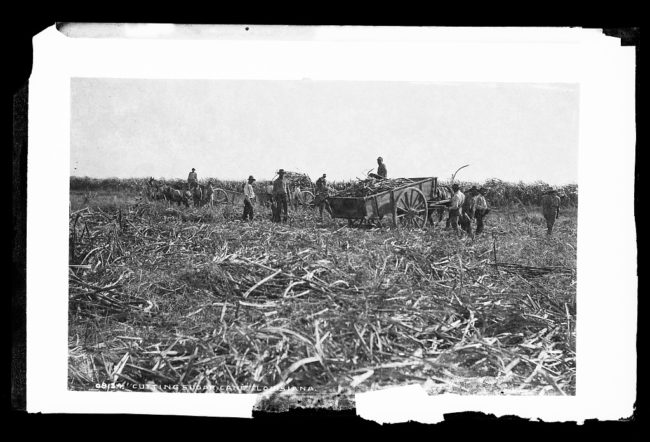 An article in the Smithsonian Magazine describes the conditions at the time.

Years after the Thirteenth Amendment brought freedom, cane cutters’ working lives were already “barely distinguishable” from slavery, argues journalist and author John DeSantis. With no land to own or rent, workers and their families lived in old slave cabins. They toiled in gangs, just like their ancestors had for nearly a century. Growers gave workers meals but paid famine wages of as little as 42 cents a day (91 cents per hour in today’s money, for a 12-hour shift). Continue reading.

This was part of the violent end to the Reconstruction era of the United States. It was also a devastating attack on organized labor. As explained in the Smithsonian Magazine,

The union died with the strikers, and the assassins went unpunished. There was no federal inquiry, and even the coroner’s inquest refused to point a finger at the murderers. Sugar planter Andrew Price was among the attackers that morning. He won a seat in Congress the next year.

Southern black farm workers would not attempt to unionize again, until the 1930s when the Southern Tenant Farmers Union attracted both white and African American members. But it too was met by a violent racist backlash. The struggle for southern unions continued into the civil rights era. On the night before he was assassinated in Memphis, Martin Luther King Jr. gave a speech supporting striking sanitation workers. He urged his audience “to give ourselves to this struggle until the end. . . You may not be on strike. But either we go up together, or we go down together.” Continue reading.

To learn more, we recommend: