On Oct. 5, 1986, the cover-up of the Iran-Contra scandal began to unravel when Eugene Hasenfus was captured by Nicaraguan troops after the plane in which he was flying was shot down. 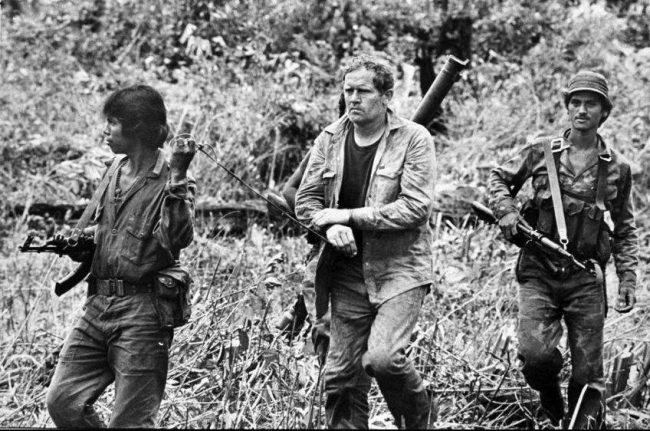 Sandinista soldiers with Eugene Hasenfus after his plane was shot down in Nicaragua while on a CIA-funded supply drop for Contra guerrillas. Source (c) Leo Dematteis.

Hasenfus had been shipping military supplies into Nicaragua for use by the Contras, an anti-Sandinista force that had been created and supported by the U.S. in violation of congressional action stopping the funding, and run by the CIA.

Documents found on the men killed in the plane crash gave evidence to the fact that the U.S. government was using proceeds from the illegal sale of weapons to Iran to support the Contra rebel groups in Nicaragua. One of the people responsible for this operation was Lieutenant Colonel Oliver North. (Recently North served as President of the National Rifle Association in 2018 and 2019.) Others who were responsible were pardoned by President G. W. Bush with the assistance of then Attorney General Bill Barr.

Historian Greg Grandin notes that it is important to examine:

Iran/Contra not as crime or conspiracy but as a consequential historical moment that both helped unite the various political constituencies that made up the Reaganite New Right, including first-generation neoconservatives, theocons, law-and-order anticommunists, economic free-traders, and disgruntled Vietnam vets, mercenaries, and covert operators.

. . . So Iran/Contra was, in its sum, a vast logistical and ideological work-around, a way both to bypass specific restrictions in the wake of Vietnam and Watergate that Congress placed on the executive branch to wage war and conduct covert activities and to neutralize a more diffuse antiwar and anti-interventionist sentiment that had overcome the American public. Support for the Contras allowed the diverse secular and religious strains of the New Right to once again assert the moral righteousness of militarism and markets. It shouldn’t, then, be thought of as a conspiracy, but as the conspiracy, a conspiracy of conspiracies — a crime of state that makes all other crimes of state possible,

We highly recommend reading Grandin’s article in The Nation, “Iran/Contra Was the Prototype for Post-Vietnam Imperial Adventure: On the 30th anniversary, we can see that it was an ideological project, with the New Right reasserting the righteousness of militarism and markets.”

Below are resources for teaching outside the textbook about Nicaragua, including the free downloadable teaching guide, Inside the Volcano and a textbook critique on this era, Disguising Imperialism: How Textbooks Get the Cold War Wrong and Dupe Students.

On July 19, 1979, the Nicaraguan people brought an end to four decades of brutal U.S. backed dictatorship