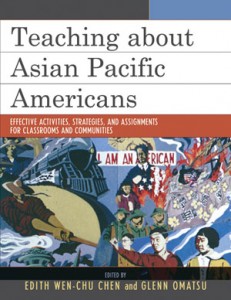 Teaching about Asian Pacific Americans was created for educators and other practitioners who want to address the void in Asian American history in the textbooks. Experts in the field of Asian American Studies will find powerful, innovative teaching activities that clearly convey established and new ideas. The activities in this book have been used effectively in workshops for staff and practitioners in student services programs, community-based organizations, teacher training programs, social service agencies, and diversity training. [Publisher’s description.]

Edith Wen-Chu Chen is associate professor in the Asian American studies department at California State University, Northridge. Her interests include race and ethnicity, Asian American women, intercultural communication, and Asians in the Americas.

Glenn Omatsu is senior lecturer in Asian American studies and faculty mentor program coordinator for the Educational Opportunity Program at California State University, Northridge. He is co-editor (with Steve Louie) of Asian Americans: The Movement and Moment.

“This book should be required reading for anyone who teaches a class on the nation’s rapidly growing and immensely diverse Asian Pacific American population, or more generally on ethnic and racial groups in America. Experienced instructors, as well as those who are teaching for the first time, will benefit greatly from the array of innovative, exciting, and ‘best practices’ classroom activities and strategies that are featured in this collection. This is more than a ‘how to’ book. It provides a compelling perspective on how the historical and contemporary experiences of all immigrant and minority groups can and ought to be taught in the twenty-first century.”—Don T. Nakanishi, University of California, Los Angeles

“This collection is interdisciplinary in scope, encompassing a variety of social science disciplines including sociology as well as humanitites and professional education.”—Teaching Sociology