On Dec. 18, 1944, the U.S. Supreme Court ruled in Korematsu v. United States that the denial of civil liberties based on race and national origin was legal.

Fred Korematsu, a U.S. citizen and the son of Japanese immigrants, had refused to evacuate when President Roosevelt ordered the internment of Japanese-Americans during WWII. Korematsu was arrested, convicted, and sent to the Topaz Internment Camp in Utah.

Persuaded by the American Civil Liberties Union (ACLU) of Northern California, Korematsu filed a case on June 12, 1942. The premise of the lawsuit was that Korematsu’s constitutional rights had been violated and he had suffered racial discrimination. However, the court ruled against Korematsu and he was sentenced to five years probation.

Determined to pursue his cause, Korematsu filed an appeal with Ninth Circuit Court of Appeals and, later, to the U.S. Supreme Court. In December 1944, the Supreme Court ruled against him.

In Of Civil Wrongs and Rights, Korematsu says,

I’m an American and just as long as I’m in this country I will keep on going and if there is a chance of reopening the case, I will do it. 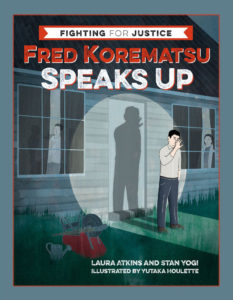 An excellent book to introduce the Korematsu story to grades 7+.

This chance came in the form of Peter Irons, a law professor, researching the internment for a book. [Howard Zinn helped Irons become a lawyer.] Irons discovered long-forgotten documents that proved that the Justice Department had misrepresented the facts to the Supreme Court. He took this evidence to Korematsu, and they both decided to re-open the case.

Peter Irons enlisted a legal team consisting mainly of Asian-American lawyers. Their efforts ultimately uncovered documents that clearly showed the government concealed evidence in the 1944 case that racism—not military necessity—motivated the internment order. More than 39 years after the fact, on November 10, 1983, a federal judge reversed Korematsu’s conviction, acknowledging the “great wrong” done to him.

On Jan. 30, 2011, the state of California celebrated Fred Korematsu Day, the first day named after an Asian American in the U.S., now recognized by six states. [This description draws from the information on the PBS documentary Of Civil Wrongs and Rights: The Fred Korematsu Story website.] The Korematsu Institute provides free teaching materials to schools throughout the United States and around the world about Fred Korematsu’s story. Find resources below for teaching about Korematsu, Japanese Internment, and Asian American history.

Fred Korematsu was arrested on a street corner in San Leandro, California for resisting Executive Order 9066, in which all people of Japanese descent were incarcerated in U.S. concentration camps.