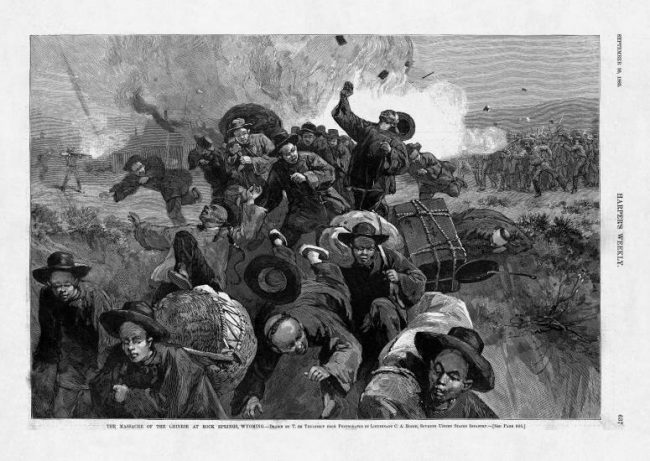 On the morning of Sept. 2, 1885, a fight broke out between white and Chinese miners in the No. 6 mine in Rock Springs. Whites fatally wounded a Chinese miner with blows of a pick to the skull. A second Chinese was badly beaten. Finally a foreman arrived and ended the violence.

But instead of going back to work, the white miners went home and fetched guns, hatchets, knives and clubs. . .

In Chinatown, it was a Chinese holiday. Many of the miners stayed home from work and were unaware of what was developing.

Shortly after noon, between 100 and 150 armed white men, mostly miners and railroad workers, convened again at the railroad tracks near the No. 6 mine. Many women and even children joined them. About two in the afternoon, the mob divided. Half moved toward Chinatown across a plank bridge over Bitter Creek. Others approached by the railroad bridge, leaving some behind at both bridges to prevent any nonwhites from leaving. Still others walked up the hill toward the No. 3 mine, north and on the other side of the tracks from Chinatown. Chinatown was nearly surrounded.

In the buildings at the Number 3 mine, white men shot Chinese workers, killing several. The mob moved into Chinatown from three directions, pulling some Chinese men from their homes and shooting others as they came into the street. Most fled, dashing through the creek, along the tracks or up the steep bluffs and out into the hills beyond. A few ran straight for the mob and met their deaths. White women took part in the killing, too.

The mob turned back through Chinatown, looting the shacks and houses, and then setting them on fire. More Chinese were driven out of hiding by the flames and were killed in the streets. Others burned to death in their cellars. Still others died that night out on the hills and prairies from thirst, the cold and their wounds.

Read “Burning Tulsa: The Legacy of Black Dispossession“ an article on teaching students about the legacy of dispossession when people of color are forced from their homes, land, and/or employment.

Book — Non-fiction. By David H.T. Wong. 2012. 240 pages.
A graphic novel that gives a panoramic but also an intimate look at the Chinese experience in North America.