On May 19, 1975, virtually every shop and factory in New York City’s Chinatown was closed, with signs posted windows and on doors reading “Closed to Protest Police Brutality.”

In April 1975, Peter Yew, a young Chinese-American, asked that police stop beating a 15 year-old whom they had stopped for a traffic violation. For his concern, Yew was savagely beaten right on the spot, taken back to the police station, stripped, beaten again and arrested on charges of resisting arrest and assault on a police officer.

Yew’s beating was the last straw as 15,000 Chinatown community members took to the streets to fight back against police attacks and brutality against their community. The community united around demands for the dismissal of all charges against Yew, an end to discrimination of the Chinese community, and an end to discrimination in employment, housing, education, health, and all other social services for all minorities and working people. 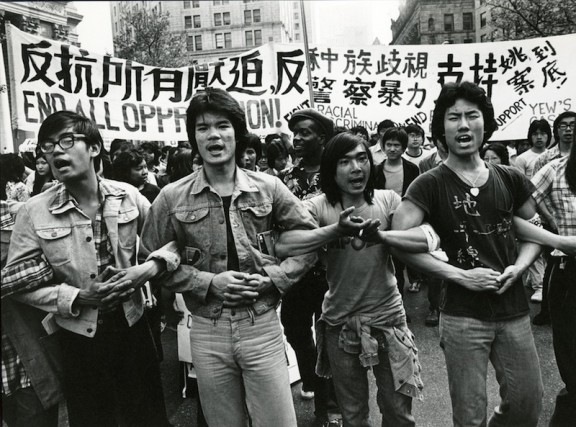 A week before the May 19th demonstration, several thousand people had marched on City Hall under an action sponsored by the Asian Americans for Equal Employment (AAFEE), raising demands similar to those raised at the May 19th action. The local business community and establishment refused to publicize or endorse the AAFEE action.

A week later, the Consolidated Benevolent Association (CCBA) called the May 19th action, bringing out old and young in one of the most united and militant actions ever taken by Chinatown residents. Although the CCBA tried to keep demands focused just on Peter Yew, the people of Chinatown clearly saw the broader issues, the fact that police repression was coming down in communities all across the United States. This was shown by the slogans raised such as “Fight Police Brutality, Fight all Oppression!” [Excerpted and reprinted from Vietnam Veterans Against the War.]