In May 1972, Brad Lomax — a disability rights activist with multiple sclerosis who used a wheel chair — helped to organize the first African Liberation Day demonstration on the National Mall. Lomax had founded the Washington, D. C., chapter of the Black Panther Party in 1969 and later participated in the disability rights sit-in in San Francisco to force enactment of Section 504.

The African Liberation Day demonstration was held on the Mall on May 27, 1972. Speakers included Ralph Abernathy, Max Stanford, Angela Davis, Stokely Carmichael, Jesse Jackson, and many, many more. Leaflet advertising African Liberation Day on May 27 starting at 11:00 AM at Malcolm X Park in Northwest Washington, D.C. A march is planned with stops at the Portuguese Embassy, Rhodesian Information Office, South African Embassy, and the U.S. State Department, on the way to Sylvan Theater on the grounds of the Washington Monument. Source: African Activist Archive.

According to the African Activist Archive,

The African Liberation Support Committee (ALSC), a Black activist organization that supported Pan Africanism, was organized at a conference in September 1972 in Detroit, Michigan. ALSC grew out of the first African Liberation Day (ALD) on May 27, 1972, that drew some 60,000 demonstrators in cities across the U.S. and Canada. The first ALD grew out of a trip of a group of Black activists to Mozambique’s liberated areas in the summer of 1971. One of the activists on that trip was Owusu Sadaukai who, upon his return, convened a meeting in Greensboro, North Carolina, that led to the first ALD demonstration, which was designed to show support for African liberation struggles. A second ALSC conference was held in 1974 and was attended by 51 local committees from 27 states and six countries. ALSC organized African Liberation Day each May, and in 1973 demonstrations were held in more than 30 cities with an estimated 100,000 participants. 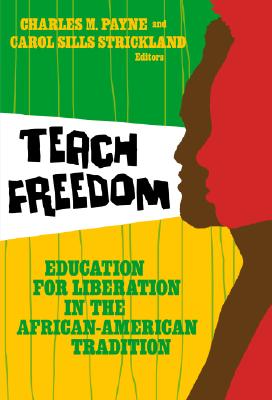 Teach Freedom: Education for Liberation in the African-American Tradition

Book — Non-fiction. Edited by Charles M. Payne and Carol Sills Strickland. Foreword by Charles E. Cobb Jr. 2008. 304 pages.
Documents the history of the use of education as a tool of collective liberation by African Americans.

In a personal essay about the longest-running, largest annual event to celebrate the legacy of Malcolm X, Charles Stephenson describes the celebration's founding and impact of that day in history.

Between April 5 and April 28, 1977, hundreds of disabled and handicapped activists organized, protested, and occupied government buildings around the country to pressure the U.S. Secretary of Health, Education, and Welfare, Joseph Califano, to enact Section 504 of the Rehabilitation Act of 1973 and publish regulations to guide its enforcement.