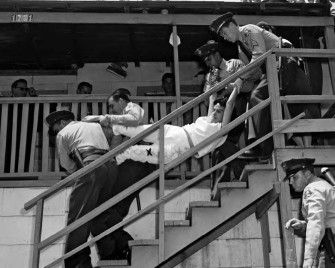 Desiree Barksdale’s description [below] reveals the pain that many students feel when their home is stolen — through eviction, divorce, court orders that place them in foster care, or gentrification that pushes low-income and people of color out of our school’s neighborhood and into the “numbers,” as the students call the outer ring of Portland where they have landed.

I knew it was the eviction notice that came no matter how hard [my mother] worked, how good we were, how friendly of a neighbor we were. I was young, but I wasn’t stupid. I knew we were going to have to move again, but so soon this time? Would we end up in a shelter again? Would we have to switch schools? Again? Tears swelled my eyes and poured down my dirty, 8-year-old cheeks. My tiny fists clenched so tight my knuckles turned white, my whole body shook with angry sobs. Barely brushing 4 feet tall, I was going to destroy the whole world for what they were doing to me: for taking away my security, my happiness, my home.

After hearing students like Desiree discuss the gentrification of Jefferson High School’s neighborhood, Dianne Leahy, the insightful and hardworking teacher with whom I co-taught junior English for the last two years, and I decided to create a yearlong curriculum we christened “Stealing Home.” In the unit, we look at the history and literature of stolen homes and land — from Native American “removals” to reservations, to the violent expulsions of African Americans during the 1920s and ’30s, to the internment of Japanese Americans during World War II. We look at the resistance that emerged. The last segment of our unit — eminent domain and urban renewal — brings the teaching back to our neighborhood and the students’ anger over gentrification that initiated our investigation. 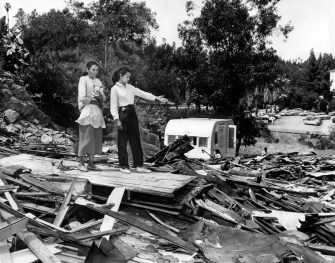 Mrs. Abrana Arechiga and her daughter, Mrs. Vicki Augustain, look at the ruins of one of their Chavez Ravine homes Date: May 14, 1959. Click for more photos from the UCLA IMLab.

We started with Hugh Arnott’s photograph [above] of Chávez resident Aurora Vargas, being physically carried from her home by police officers. As we showed students the Vargas slide, we said, “First, just notice what you see. Make a list of your observations about the photograph.” As students shared their observations, we listed them on the board. For the next section, we asked students to make connections. “What does this photograph remind you of? Anything from your life? From movies? From a book?” Again students shared out loud.

As a language arts teacher, I have a duty to teach students to read and write effectively, but one cannot write without learning how to think about the world, to step back from our individual pain and ask questions and find patterns. I want students like Desi to know that her loss of home wasn’t because she wasn’t good enough or smart enough, but because we live in a system that continues to put profit over people

As an economics teacher, housing is a subject that tends to come up as we talk about the role of government in the macroeconomic section and in particular the topic of eminent domain. Because our text gives only a short bit on the concepts and are generally pro-government/capitalism, I search out a few materials to help fill out the entire story.

I liked the lesson by Linda Christensen because many of my students in northwestern Arizona have some tie to California and many are baseball fans and the article discusses the building of Dodger Stadium. Or actually more importantly, how eminent domain is often used in a way I think most people recognize as prejudiced. The first hand accounts and the variety of resources (many of which can be found online) help to paint a more complete picture of how these generally “good” public works projects are far more complicated then they seem at first.

In particular I like the literary elements like the poems that really add not just a human element but also the art and opportunity for students to examine and delve deeper than just the words on a page. It keeps this from being a basic academic/philosophical issue and shows the effect that is had on human lives. 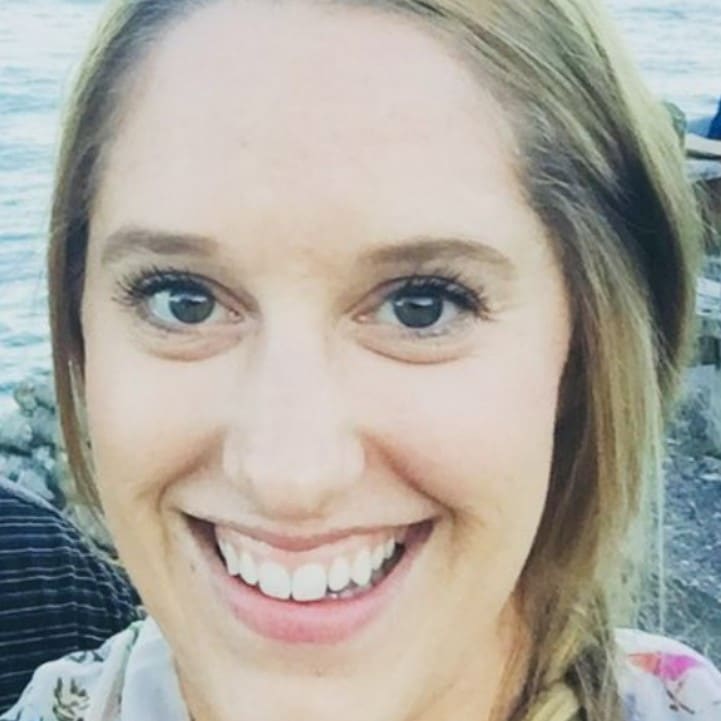 I used Linda Christensen’s Stealing Home lesson and my students LOVED IT! Many connected to this lesson on a personal level. It is a huge piece of getting them to understand the human side to complicated (and boring) government issues.

Housing discrimination and other forms of systemic racism/classism are all themes I touch upon many times throughout the year, but particularly in looking at Civil Rights Supreme Court cases… I work through with students some of the options of the federal government and ask the big question “in what situations should our federal government use its rank over state governments?”

Once students better understand these topics through more personal narratives like Christensen’s, it is something they are passionate about post-lesson and they love discussing how these issues still exist today and how we might go about changing them (whether that’s at the federal level or not).

Students gain so much by being able to make personal and lifelong connections to issues involving our government. 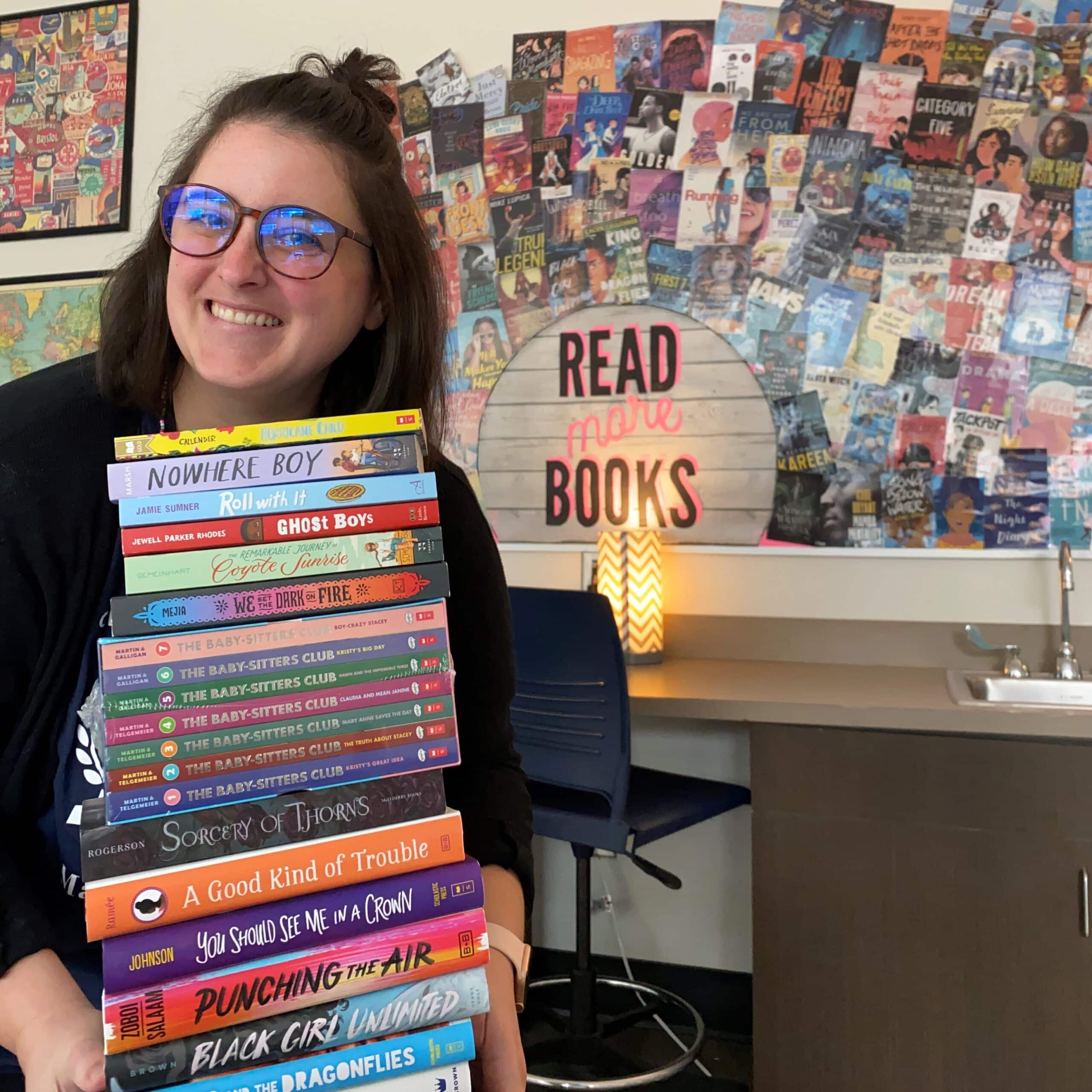 Living in Charleston, South Carolina my students are no stranger to housing discrimination. And during the COVID-19 pandemic, housing uncertainty is increasing in the community. The lesson “Stealing Home: Eminent Domain, Urban Renewal, and the Loss of Community,” taught over several days, served as a great opportunity to help my students make connections between historical housing discrimination and current issues in the community.

I began the lesson with a comparison of photos and stories. First, Aurora Vargas being carried out of her home and then a recent CNN story about people being evicted during the pandemic. Students were asked to compare and contrast what they were seeing and reasons people could be removed from their homes.

We then talked through the Dodger Stadium story and talked about all the ways the people fought back and what “eminent domain” means. Eminent Domain is personal to my students because there is a current push in Charleston to replace a section of low-income neighborhoods with a freeway. Students were able to make a lot of connections between Dodger Stadium and what they are seeing in Charleston. 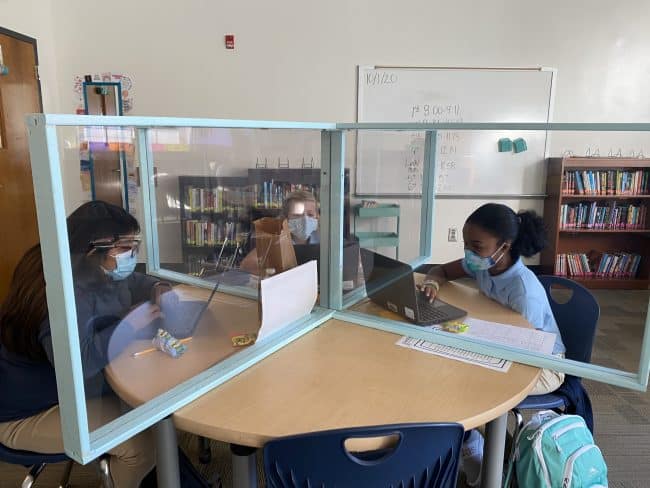 We finished by talking about Thomas’ Albina Poem. Students read it and shared their reactions to it. I then showed them photos of how the neighborhood around our school has changed in the last decade. We talked about gentrification and several students were able to share how their families have been affected by all the changes in Charleston. After looking at photos I again asked them to reflect on the poem and what they think the future of Charleston holds.

In reflection, students expressed that they liked being able to talk about these issues that our community faces and use words like “gentrification” to describe what they have experienced. They also expressed a desire to dig deeper into the historical aspects of how racism shapes Charleston.

This lesson was originally published in the Summer 2013 issue of Rethinking Schools magazine.

For more lessons and articles like this one, visit Rethinking Schools. 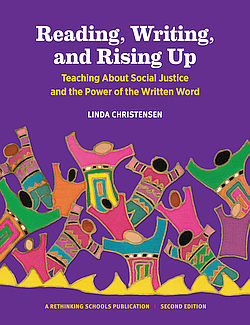 Reading, Writing, and Rising Up: Teaching About Social Justice and the Power of the Written Word

One comment on “Stealing Home: Eminent Domain, Urban Renewal, and the Loss of Community”