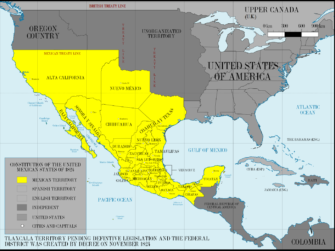 April 25 marks the official beginning of the U.S.-Mexico War in 1846. Rethinking Schools editor Bill Bigelow explains the importance of teaching outside the textbook about the war:

Bigelow is the author of a free downloadable lesson called “U.S. Mexico War: “We Take Nothing by Conquest, Thank God’.” The lesson features a reading by Howard Zinn and an activity with many voices on the war typically missing from textbooks such as: Cochise, Colonel Ethan Allen Hitchcock, Frederick Douglass, General Mariano Vallejo, Henry David Thoreau, María Josefa Martínez, Padre Antonio José Martínez, the Saint Patrick’s Battalion, and many more. A version of the lesson is also available in Spanish.

Find the lesson and more resources for teaching about the border below.