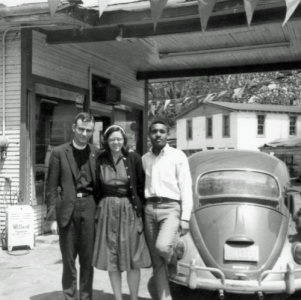 Jonathan Myrick Daniels, an Episcopal seminarian, had gone to Alabama to work on the desegregation of churches and voter registration.

On August 13, 1965 Daniels and others picketed whites-only stores in southern Lowndes County. They were arrested and taken to Hayneville, where they were jailed in overcrowded cells with no air conditioning and toilets that routinely backed sewage out onto the floor.

They were released on Aug. 20, 1965, but were not provided with any means of transportation back to Selma.

Stranded in the 100 degree heat, Daniels and the others sought a cool drink at a nearby store. There, they were met by Tom Coleman, holding a shotgun, who demanded they leave the property or risk being shot.

As Coleman aimed at 17-year-old African American Ruby Sales, Daniels pushed her away and took the full impact of the shotgun blast in his chest, dying instantly. Coleman was acquitted.

[Description from the Encyclopedia of Alabama]

Read more on CRMvet.org and learn more about the struggle in Lowndes County in “Lowndes County and the Voting Rights Act” by Hasan Kwame Jeffries. See the online documentary, Here Am I, Send Me: The Story of Jonathan Daniels.

Here Am I, Send Me: The Story of Jonathan Daniels from Episcopal Marketplace on Vimeo.

A young adult book about Daniels was released in 2016, called Blood Brother: Jonathan Daniels and His Sacrifice for Civil Rights by Rich Wallace and Sandra Neil Wallace.