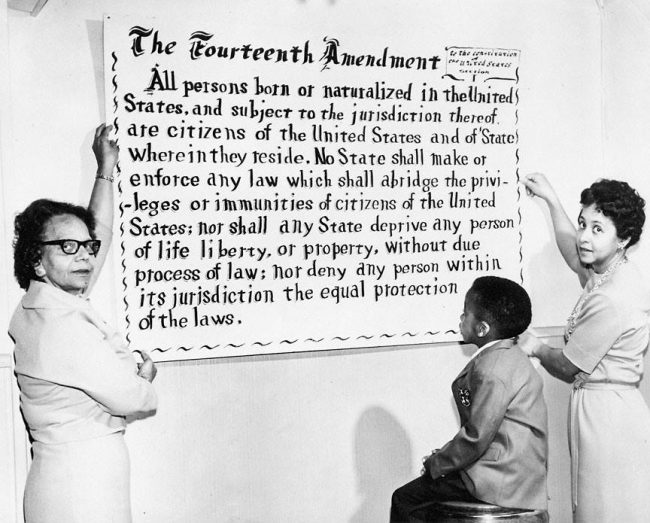 Sylvia N. Thompson (left) with her daughter Addie Jean Haynes and Addie’s ten-year-old son Bryan Haynes holding up a poster-sized copy of the 14th Amendment at the NAACP Portland office in 1964.

The 14th Amendment was designed to grant citizenship to and protect the civil liberties of people recently freed from slavery. As historian Martha Jones explains on Democracy Now,

However, as described in the examples below, there were soon to be limitations on those protections.

When federal charges were brought against several white supremacists responsible for the Colfax Massacre against African Americans, the Supreme Court ruled in United States v. Cruikshank that the 14th Amendment only applied to state actions and offered no protections against acts by individual citizens.

These liberties were undermined and limited after the Plessy v. Ferguson (1896) Supreme Court case which upheld the constitutionality of segregation and Jim Crow laws and Black codes.

Howard Zinn writes in Chapter 11: Robber Barons and Rebels of A People’s History of the United States:

Very soon after the Fourteenth Amendment became law, the Supreme Court began to demolish it as a protection for Black [people], and to develop it as a protection for corporations. However, in 1877, a Supreme Court decision (Munn v. Illinois) approved state laws regulating the prices charged to farmers for the use of grain elevators. The grain elevator company argued it was a person being deprived of property, thus violating the Fourteenth Amendment’s declaration “nor shall any State deprive any person of life, liberty, or property without due process of law.” The Supreme Court disagreed, saying that grain elevators were not simply private property but were invested with “a public interest” and so could be regulated. . . .

Learn about issues of citizenship today and before the 14th Amendment from an interview with Martha S. Jones, author of Birthright Citizens: A History of Race and Rights in Antebellum America in a Democracy Now! interview,  How African Americans Fought For & Won Birthright Citizenship 150 Years Before Trump Tried to End It.

Below are classroom resources for teaching about the U.S. Constitution and the all too brief and often overlooked history of the Reconstruction era.

Harriet Elizabeth Brown, a teacher from Maryland, sued for equal pay for Black teachers and won the case. 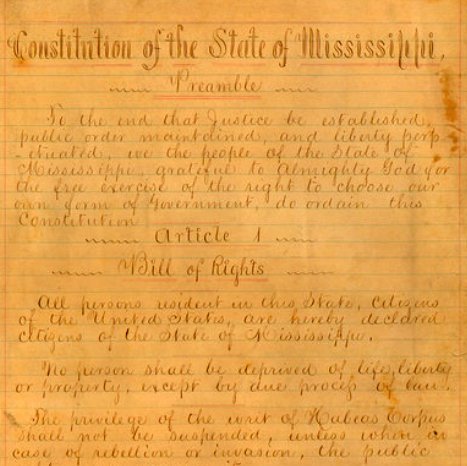