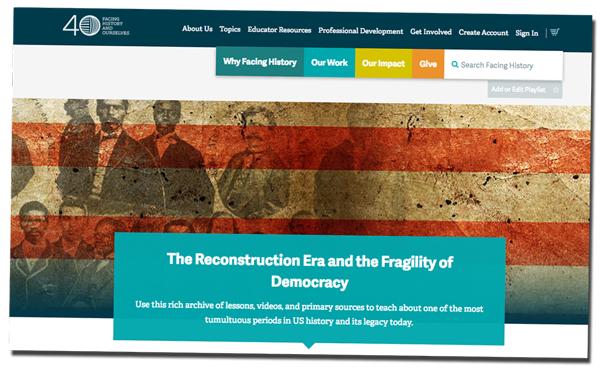 The Reconstruction Era and the Fragility of Democracy  is a collection of readings, primary documents, video clips, and lessons produced by Facing History and Ourselves in 2015. The resources and full unit are available online for free access by teachers.

The unit gives a strong overview of the entire Reconstruction era and is a useful resource for the #TeachReconstruction campaign. In particular, when teaching Reconstruction we would recommend “Lesson #5: Healing and Justice” as a strong follow-up to the Zinn Education Project role play “Reconstructing the South“; “Lesson #9: Equality for All?” as an important exploration of the limits of Radical Reconstruction; and “Lesson #15: The Power of Myth and the Purpose of History,” which uses a critical examination of Birth of a Nation to introduce students to the historiography of Reconstruction.

A few examples of the documents provided in this unit: