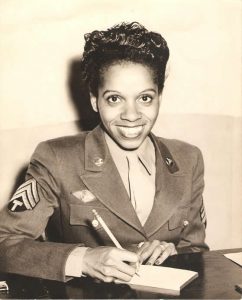 On July 7, 1948, Edna Griffin, a World War II veteran, was refused service by a Katz Drug Store in downtown Des Moines, Iowa, when she ordered an ice cream soda. She was with two other adults and her one-year-old daughter. The store claimed they were “not equipped to serve colored people,” according to the Iowa History Journal.

The group took this case of discrimination to court. Though they denied doing so during the trial, the group’s intention was to use their lawsuit as a test case. Their victory set precedent years before the Greensboro Sit-in at Woolworth’s (1961) and spurred the enforcement of Iowa’s 1884 Civil Rights Act. However, the actual practices of Katz Drug Store did not change until the business felt the economic effects of pickets, boycotts, and sit-ins that Griffin helped to coordinate.

Born in Kentucky in 1909, Griffin was a longtime activist. She studied studied sociology at Fisk University, protested Mussolini’s invasion of Ethiopia, and supported a teachers’ strike. In the 1940s, she moved to Des Moines, Iowa so that her husband could attend medical school. There, she became a leader in the Iowa Progressive Party and the local chapter of the Communist Party.

Griffin continued to fight against racism in business services, housing, policing, and hiring practices. She was active in a variety of groups including the ACLU and League of Women Voters, she helped to organize a labor union, and she was a frequent contributor to The Iowa Bystander. She was also active in anti-war efforts throughout her life — petitioning to outlaw the atomic bomb, protesting the Korean War, and getting arrested when she was 75 for sitting in the middle of the highway to stop a shipment of nuclear warheads. The FBI kept a file on her as part of COINTELPRO.

Learn more about Griffin in “The Myth-Busting History of Edna Griffin” by Katy Swalwell and Jennifer Gallagher and at the Iowa History Journal website.

Find related lessons below on McCarthyism and COINTELPRO.

Teaching Activity. By Ursula Wolfe-Rocca. 29 pages. Rethinking Schools.
Through examining FBI documents, students learn the scope of the FBI’s COINTELPRO campaign to spy on, infiltrate, discredit, and disrupt all corners of the Black Freedom Movement.

Teaching Activity. By Ursula Wolfe-Rocca. In this mixer lesson, students meet 27 different targets of government harassment and repression to analyze why disparate individuals might have become targets of the same campaign, determining what kind of threat they posed in the view of the U.S. government.