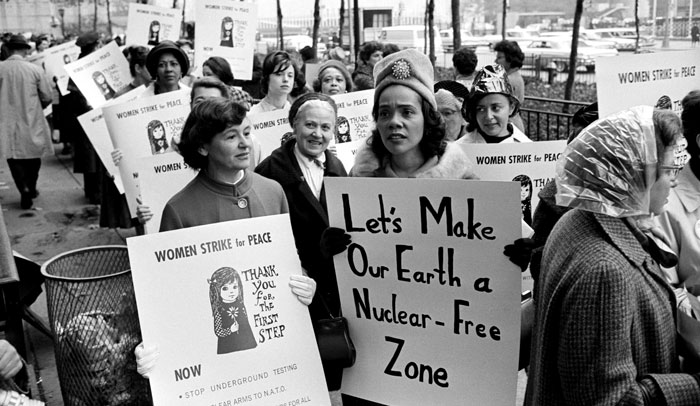 When the Rev. Martin Luther King Jr. announced his strong opposition to the war in Vietnam, the media attacked him for straying outside of his civil rights mandate. In so many words, powerful interests told him: “Mind your own business.” In fact, African American leaders have long been concerned with broad issues of peace and justice — and have especially opposed nuclear weapons. Unfortunately, this activism is left out of mainstream, corporate-produced history textbooks.

On June 6, 1964, three Japanese writers and a group of hibakusha (atomic bomb survivors) arrived in Harlem as part of the Hiroshima/Nagasaki World Peace Study Mission. Their mission: to speak out against nuclear proliferation. 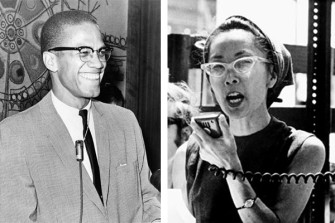 Yuri Kochiyama, a Japanese American activist, organized a reception for the hibakusha at her home in the Harlem Manhattanville Housing Projects with her friend Malcolm X. Malcolm said, “You have been scarred by the atom bomb. You just saw that we have also been scarred. The bomb that hit us was racism.” He went on to discuss his years in prison, education, and Asian history. Turning to Vietnam, Malcolm said, “If America sends troops to Vietnam, you progressives should protest.” He argued that “the struggle of Vietnam is the struggle of the whole Third World: the struggle against colonialism, neocolonialism, and imperialism.” Malcolm X, like so many before him, consistently connected colonialism, peace, and the Black freedom struggle. Yet students have rarely heard this story.

Focusing on African American history, too often textbooks reduce the Black freedom movement to the Montgomery Bus Boycott and the March on Washington. Rosa Parks and Dr. King are put in their neat categorical boxes and students are never taught the Black freedom struggle’s international dimensions, viewing slavery, Jim Crow, and the Civil Rights Movement as purely domestic phenomena unrelated to foreign affairs. However, Malcolm X joined a long list of African Americans who, from 1945 onward, actively supported nuclear disarmament. W. E. B. Du Bois, Bayard Rustin, Coretta Scott King, Dr. Martin Luther King Jr., and the Black Panther Party were just a few of the many African Americans who combined civil rights with peace, and thus broadened the Black freedom movement and helped define it in terms of global human rights.

Writing in the Chicago Defender, poet Langston Hughes was among the first to publicly criticize using the atomic bomb in Hiroshima and the role race played in the decision. Years later, Hughes again used the Black press to raise awareness about the nuclear issue. He implored the U.S. not to use nuclear weapons in Korea, making clear that things would be different if Americans viewed people of color as human beings rather than an “Other.” In his view, racism, nuclear weapons, and colonialism were indeed inextricably linked. 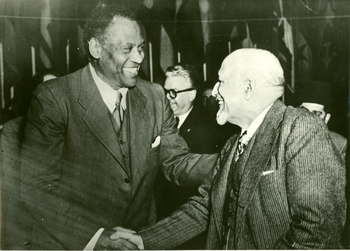 If students learn about Du Bois at all, it is usually that he helped found the National Association for the Advancement of Colored People (NAACP) or that he received a Ph.D. from Harvard. However, a few weeks after the atomic bombings of Hiroshima and Nagasaki, Du Bois likened Pres. Truman to Adolf Hitler, calling him “one of the greatest killers of our day.” He traveled to Japan and consistently criticized the use of nuclear weapons. In the 1950s, fearing another Hiroshima in Korea, Du Bois led the effort in the Black community to eliminate nuclear weapons with the “Ban the Bomb” petition. Many students go through their entire academic careers and learn nothing of Du Bois’ work in the international arena. 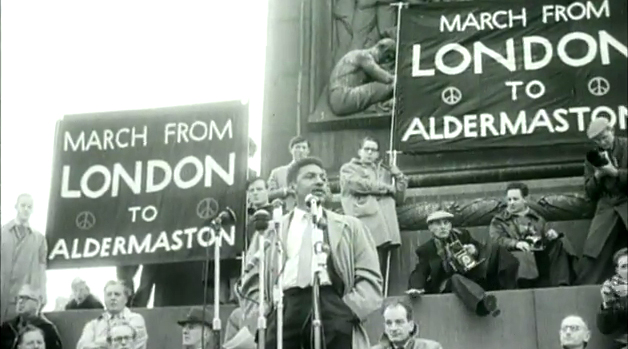 If students ever hear the name Bayard Rustin, it is usually related to his work with the March on Washington. He has been tragically marginalized in U.S. history textbooks, in large part because of his homosexuality. However, Rustin’s body of work in civil rights and peace activism dates back to the 1930s. In 1959, during the Civil Rights Movement, Rustin not only fought institutional racism in the United States, but also traveled to Ghana to try to prevent France from testing its first nuclear weapon in Africa.

These days, some textbooks acknowledge Dr. King’s critique of the Vietnam War. However, King’s actions against nuclear weapons began a full decade earlier in the late 1950s. From 1957 until his death, through speeches, sermons, interviews, and marches, King consistently protested the use of nuclear weapons and war. King called for an end to nuclear testing, asking, “What will be the ultimate value of having established social justice in a context where all people, Negro and White, are merely free to face destruction by Strontium-90 or atomic war?” Following the Cuban Missile Crisis in October 1962, King called on the government to take some of the billions of dollars it spent on nuclear weapons and use those funds to increase teachers’ salaries and build much-needed schools in impoverished communities. Two years later, receiving the Nobel Peace Prize, King argued that the spiritual and moral lag in our society was due to three problems: racial injustice, poverty, and war. He warned that in the nuclear age, society must eliminate racism or risk annihilation.

Letter from the Campaign for Nuclear Disarmament inviting Dr. King and Bayard Rustin to their mass march.

Dr. King’s wife largely inspired his antinuclear stance. Coretta Scott King began her activism as a student at Antioch College. Throughout the 1950s and 1960s, King worked with various peace organizations, and, along with a group of female activists, began pressuring Pres. Kennedy for a nuclear test ban. In 1962, Coretta King served as a delegate for Women Strike for Peace at a disarmament conference in Geneva that was part of a worldwide effort to push for a nuclear test ban treaty between the United States and the Soviet Union. Upon her return, King spoke at AME church in Chicago, saying, “We are on the brink of destroying ourselves through nuclear warfare. . . . The Civil Rights Movement and the Peace Movement must work together ultimately because peace and civil rights are part of the same problem.” Of course, Coretta was not alone. Zora Neale Hurston, Marian Anderson, and Lorraine Hansberry were just a few of the Black women who spoke out against the use of nuclear weapons.

Each new school year students will hopefully open their textbooks to study the nuclear arms race and the Black Freedom Movement. However, most will not learn how these issues are connected. They will not learn of all those in the Civil Rights Movement who simultaneously fought for peace. But this must change, and soon. The scarring of war and poverty and racism that Malcolm X spoke of continues. It is time that students learn about the long history of activism that has challenged these deadly triplets.

© 2015 The Zinn Education Project, a project of Rethinking Schools and Teaching for Change. 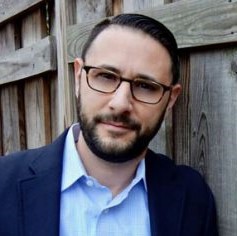 Vincent J. Intondi is an associate professor of history at Montgomery College and director of research for American University’s Nuclear Studies Institute. He is the author of African Americans Against the Bomb: Nuclear Weapons, Colonialism, and the Black Freedom Movement (Stanford University Press, 2015).