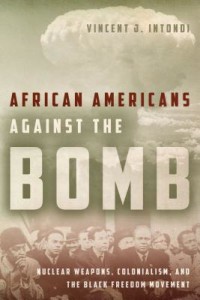 Some of the earliest and strongest protests against nuclear weapons came from activists in the Black freedom movement. Despite Cold War accusations of communism, major African Americans figures — including Bayard Rustin, Langston Hughes, Marian Anderson, and Duke Ellington — voiced opposition to nuclear weapons. W. E. B. Du Bois said, “Big business wants to keep your mind off social reform [and] would rather spend your taxes for atom bombs than for schools.”

In 2013, Michelle Alexander, author of The New Jim Crow, urged activists to “get out of our lane” and “connect the dots” among social issues. Intondi’s research makes it clear that, decades ago, Black activists recognized how domestic and foreign policy issues converge. [Review by Rethinking Schools.]