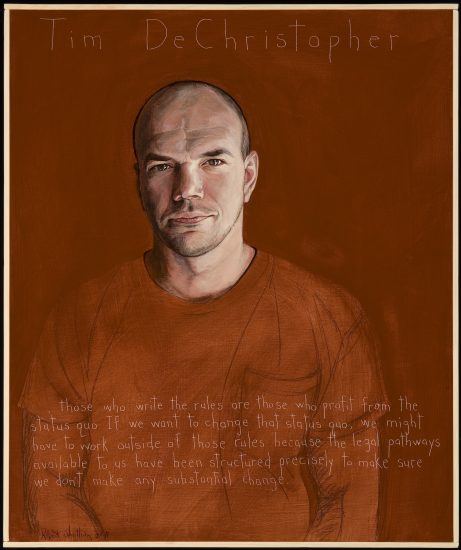 DeChristopher placed fake bids, an act of civil disobedience in which he disrupted a government oil and gas lease auction in order to protect fragile land in southern Utah from long term damage. He noted in a Democracy Now! interview:

He was arrested and sentenced to two years in prison. This portrait from Americans Who Tell the Truth ($20 for poster) features the quote:

. . . those who write the rules are those who profit from the status quo. If we want to change that status quo, we might have to work outside of those rules because the legal pathways available to us have been structured precisely to make sure we don’t make any substantial change.

DeChristopher was interviewed by Bill Moyers and on Democracy Now! (see below) shortly after his release from prison.

Below are resources for teaching about environmental justice.

Activists circled the White House to protest the Keystone Pipeline, an oil system that transports crude oil from Canada to various locations in the U.S.