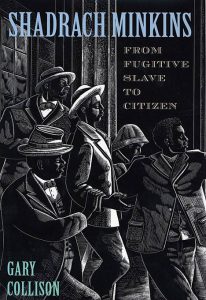 Shadrach Minkins, who had escaped from slavery in Norfolk, Virginia, became the first person arrested in Massachusetts under the Fugitive Slave Act of 1850 on Feb. 15, 1851. A group of abolitionists freed Minkins from the U.S. Marshals in Boston and helped him escape to Canada. Here is a description from Mass Moments:

Minkins had only been in Boston for a few months when the Fugitive Slave Law was passed. He had been fortunate to find steady work as a waiter in a coffee house in the center of Boston and was lodging there, too. But on February 15, his luck ran out.

Three days before, John Caphart, a constable and professional slave hunter from Norfolk, had arrived in Boston bearing legal papers from Minkins’s master. Under the new law, all he had to do was get an arrest warrant for Minkins, bring him before a judge, and identify him as a fugitive.

A group of marshals [working with Caphart]. . .grabbed Minkins [and] marched him . . . directly across the street into the federal courthouse. 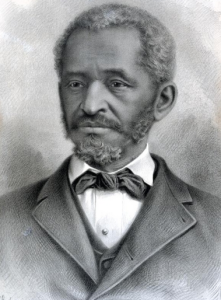 A furious mob [of abolitionists] rushed the courtroom door, overpowering the marshals inside. About 20 Black men grabbed Minkins “by the collar and feet” and ran out the door, down the hallway and stairs, and into the crowded street. The crowd was so large and so hostile that the marshals dared not pursue the rescuers.

The atmosphere outside was jubilant and chaotic.

Abolitionists Lewis Hayden and Robert Morris separated Minkins from the crowd and took him to a hiding place on Beacon Hill. A few hours later, Hayden smuggled Minkins out of Boston to Cambridge and that night took him by carriage to an Underground Railroad stop in Concord. Read full story.

Minkins (1814? – Dec. 13, 1875) got to safety in Canada, where he and other African American expatriates in Montreal created the city’s first Black community.

Learn more from Shadrach Minkins: From Fugitive Slave to Citizen by Gary Collison and Robert Morris Was a Black Bostonian Who Fought For Freedom. Why Don’t We Have a Statue of Him? Also, read this tweet thread by Michael Harriot.

Whenever I’m asked about allyship, I like to tell the story of history’s most notoriously revolutionary group of white allies — the Boston Vigilance Committee.