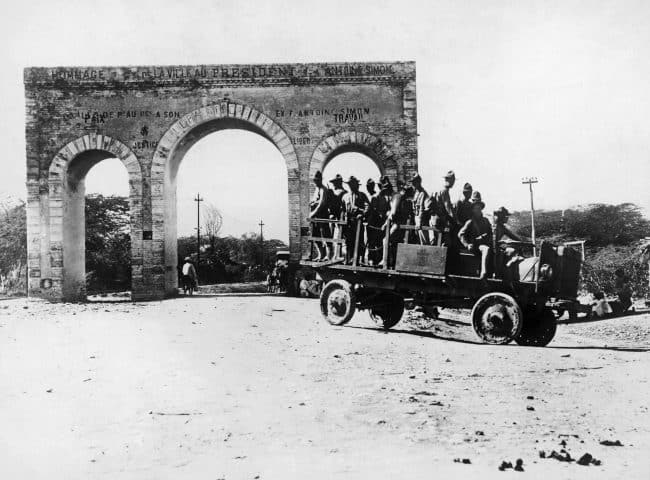 U.S. troops in Haiti in 1929. BY KEYSTONE-FRANCE/GAMMA-KEYSTONE VIA GETTY

In Les Cayes, Haiti, one of the worst massacres of civilians took place on December 6, 1929, during the nineteen-year American occupation of Haiti, an occupation that began in 1915.

The Cayes massacre took place during a demonstration, which was part of a nationwide strike and an ongoing local rebellion. U.S. Marine battalions fired on fifteen hundred people, wounding twenty-three and killing twelve.

On July 28, 1915, United States Marines landed in Haiti on the orders of President Woodrow Wilson, who feared that European interests might reduce American commercial and political influence in Haiti, and in the region surrounding the Panama Canal. The precipitating event was the assassination of the Haitian President, Jean Vilbrun Guillaume Sam, but U.S. interests in Haiti went back as far as the previous century. (President Andrew Johnson wanted to annex both Haiti and the Dominican Republic. Twenty years later, Secretary of State James Blaine unsuccessfully tried to obtain Môle-Saint-Nicolas, a northern Haitian settlement, for a naval base.)

By 1915, the Americans were also afraid that an ongoing debt Haiti was forced to pay to France tied the country too closely to its former colonizer; Germany’s growing commercial interests in Haiti were another major concern. So one of the first actions carried out by the U.S. at the start of the occupation was to move Haiti’s financial reserves to the United States and then rewrite its Constitution to give foreigners land-owning rights.

. . . The notion that there were indispensable nation-building benefits to this occupation falls short, especially because the roads, schools, and hospitals that were built during this period relied upon a tyrannical forced-labor system, a kind of national chain gang. Call it gunboat diplomacy or a banana war, but this occupation was never meant — as the Americans professed — to spread democracy, especially given that certain democratic freedoms were not even available to the United States’ own Black citizens at the time.  Continue reading “The Long Legacy of Occupation in Haiti” by Edwidge Danticat in The New Yorker.