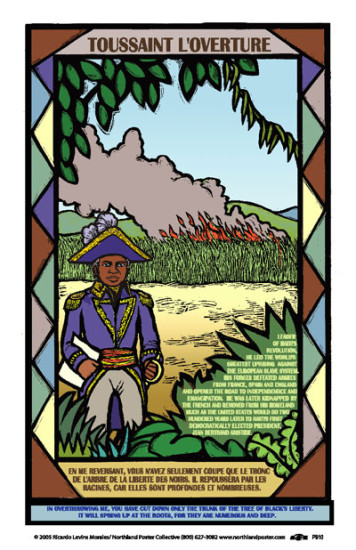 Speaking for the Negro, I can say, we owe much to Walker for his appeal; to John Brown for the blow struck at Harper’s Ferry. . . and to the anti-slavery societies at home and abroad; but we owe incomparably more to Haiti than to them all. I regard her as the original pioneer emancipator of the nineteenth century. — Frederick Douglass

On Jan. 1, 1804, Haiti became a free republic after a revolution that began in 1791, declaring independence for all people from colonial rule and enslavement.

Frederick Douglass, who served as U.S. minister to Haiti (1889-91) until he resigned in protest, gave a lecture on the history of Haiti and the U.S. treatment of Haiti that is as relevant and informative today as it was when he gave it on Jan. 2, 1893. He begins,

My subject is Haiti, the Black Republic; the only self-made Black Republic in the world. I am to speak to you of her character, her history, her importance and her struggle from slavery to freedom and to statehood. I am to speak to you of her progress in the line of civilization; of her relation with the United States; of her past and present; of her probable destiny; and of the bearing of her example as a free and independent Republic, upon what may be the destiny of the African race in our own country and elsewhere.

He continues on the unique role of Haiti,

Until she [Haiti] spoke no Christian nation had abolished negro slavery. Until she spoke no christian nation had given to the world an organized effort to abolish slavery. Until she spoke the slave ship, followed by hungry sharks, greedy to devour the dead and dying slaves flung overboard to feed them, plouged in peace the South Atlantic painting the sea with the Negro’s blood. Until she spoke, the slave trade was sanctioned by all the Christian nations of the world, and our land of liberty and light included. Men made fortunes by this infernal traffic, and were esteemed as good Christians, and the standing types and representations of the Saviour of the World. Until Haiti spoke, the church was silent, and the pulpit was dumb. Slavetraders lived and slave-traders died. Funeral sermons were preached over them, and of them it was said that they died in the triumphs of the christian faith and went to heaven among the just.

Learn more from The Common Wind: Afro-American Currents in the Age of the Haitian Revolution by Julius S. Scott and the resources listed below.