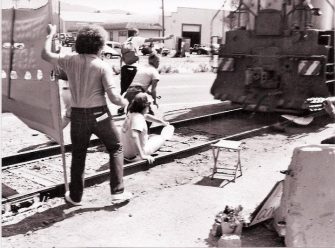 S. Brian Willson sitting on the tracks in a nonviolent protest blocking an arms shipment to El Salvador.

On Sept. 1, 1987, Vietnam War veteran and peace activist S. Brian Willson was nearly killed by a U.S. Navy munitions train while he sat on the tracks to nonviolently blockade a weapons shipment to El Salvador.

As seen in the photo, his right hand is on the rail in an attempt to quickly move as the accelerating train defies regulations, speeding towards him at three times its legal speed limit and refusing to wait for arrests as was routine policy.

Learn more about his transformation from Vietnam veteran to radical pacifist, compelled by his understanding that “We are not worth more, they are not worth less” in this archived interview with Democracy Now! and in his memoir, Blood on the Tracks: The Life and Times of S. Brian Willson.