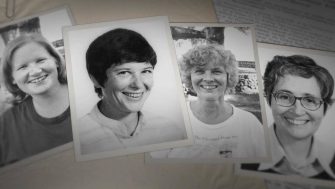 On Dec. 2, 1980, three nuns (Ita Ford, Maura Clarke, and Dorothy Kazel) and one lay worker (Jean Donovan) were abducted, raped, and murdered upon their return from Comalapa International Airport in El Salvador by members of the U.S. backed National Guard.

President Ronald Reagan’s administration blamed the nuns for their own murder. Foreign-policy advisor Jeane Kirkpatrick told a reporter, “The nuns were not just nuns. The nuns were also political activists” and Secretary of State Alexander Haig said, “perhaps they ran a roadblock.”

We recommend the video, Laying Out a Case for Deporting Human Rights Abusers from the New York Times about the campaign to have the generals who ordered their murder deported from Florida where they were allowed to settle by the Bush administration.

Learn more about the four women from the IRTF – The InterReligious Task Force on Central America and find resources for teaching about the history of El Salvador from Teaching for Change.