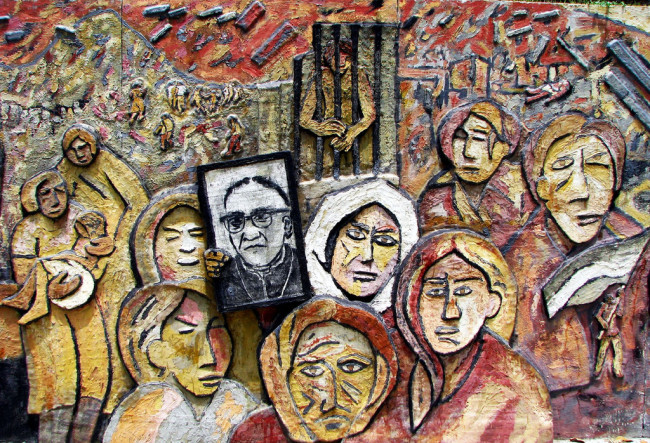 Mothers of the Disappeared hold a picture of Romero. Part of the “Memorial Wall” mural in El Salvador on the history of the war of the 1980s back to 1932, when a peasant uprising was brutally repressed by the U.S. backed military dictatorship. Source: Compadres, a Canadian teachers’ organization. (c) Walkyman

I would like to make a special appeal to the men of the National Guard, the police and the military. Brothers, you come from our own people. You are killing your own brother peasants. No one has to obey an immoral law. I implore you, I beg you, I order you in the name of God: stop the repression. — Archbishop Óscar Romero

The day after this sermon, Salvadoran Archbishop Óscar Romero was assassinated while celebrating mass on March 24, 1980.

This was soon after he had written to U.S. President Jimmy Carter warning that increased U.S. military aid would “undoubtedly sharpen the injustice and the political repression inflicted on the organized people, whose struggle has often been for their most basic human rights.”

On December 2 of that same year, three North American nuns and one layworker were raped, tortured, and killed. But the aid continued. During the 1980s, the U.S. sent an average of $1 million a day, primarily for the military.

Archbishop Oscar Romero was a religious leader and activist in El Salvador during the 1960s and 1970s. He was appointed archbishop because during the early part of his career he was a conservative and traditional religious figure.

After a fellow priest and friend, Rutilio Grande, was assassinated for his political and social work with El Salvador’s peasants and poor, Romero was transformed. Romero began to fight fervently for the rights of the oppressed and was a key figure in the religious movement to practice “liberation theology.”

His high position within the Catholic Church allowed him to speak out for the poor and oppressed. He championed the human rights of the people of El Salvador, using YSAX, the archdiocesan radio station, to give sermons and speeches about the injustices committed against his fellow Salvadorans.

In February of 1980, he wrote a letter to President Carter asking him to halt U.S military assistance to the Salvadoran government. On March 24, 1980, an assassin shot and killed Archbishop Romero while he was giving mass in small hospital church. Over 250,000 people attended his funeral, which became a protest against the government. He became an icon to El Salvador’s revolution.

Listen to the ballad about Romero, “Seeds of Freedom,” composed by Joe DeFilippo and performed by the R.J. Phillips Band, a group of Baltimore musicians.

See the Democracy Now! two-part interview with Matt Eisenbrandt, human rights lawyer and author of Assassination of a Saint: The Plot to Murder Óscar Romero and the Quest to Bring His Killers to Justice, Vatican Canonizes Salvadoran Archbishop Oscar Romero, Who Was Killed by a U.S.-Backed Death Squad.

Here are resources for teaching about Central America from Teaching for Change.

The Export of Colors

Article. By Manlio Argueta. From Cuzcatlán, Donde bate la mar del sur. An excerpt from a novel of historical fiction about the impact of an export economy on peasants in El Salvador.

Film. Directed by Eduardo López & Peter Getzels. 2012. 90 min. Documentary that examines the direct connection between the long history of U.S. intervention in Latin America and the immigration crisis we face today. 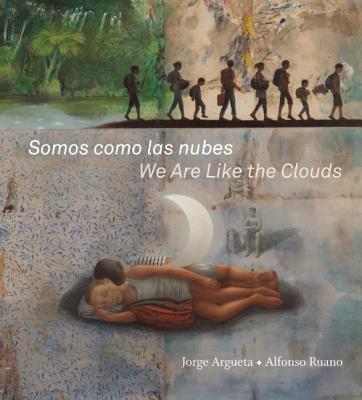 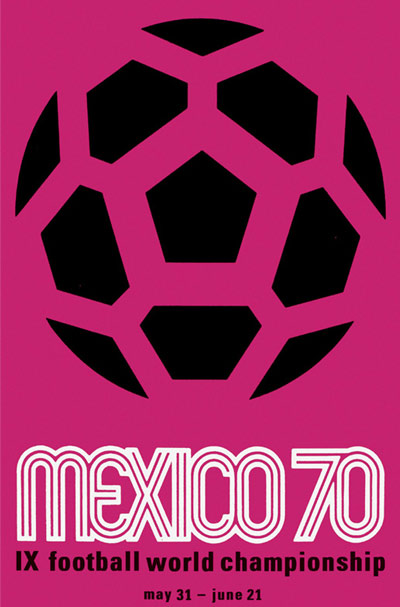 In 1969, a brief war broke out between Honduras and El Salvador.