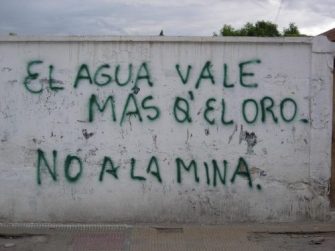 “Water is worth more than gold: no to the mine”

We put civil war in quotes because the U.S. invested millions of dollars to back the Salvadoran government and military, making it more than an internal conflict.

Since the war has ended, there has been a struggle to protect the land and water from gold mining.

Thirty years ago, several thousand civilians in the northern Salvadoran community of Santa Marta quickly gathered a few belongings and fled the US-funded Salvadoran military as it burned their houses and fields in an early stage of the country’s twelve-year civil war. Dozens were killed as they crossed the Lempa River into refugee camps in Honduras.

Today, residents of this area, some born in those Honduran refugee camps, are fighting U.S. and Canadian mining companies eager to extract the rich veins of gold buried near the Lempa River, the water source for more than half of El Salvador’s 6.2 million people. Once again, civilians have been killed or are receiving death threats.

Learn more about this contemporary mining struggle in the article Like Gold for Water in El Salvador (The Nation) and in the film “Gold or Water? The Struggle Against Mining in El Salvador,” co-produced by Ron Carver and narrated by Julian Bond. (A short film in English and Spanish.)

Read, ‘Journalists Targeted for Death in El Salvador as Environmental Disaster Looms‘ and El Salvador Votes for Water Over Gold: Against overwhelming odds, an international grassroots campaign has won the world’s first comprehensive ban on metals mining by Robin Broad and John Cavanagh (The Nation, April 4, 2017).