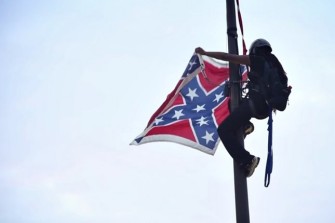 On June 27, 2015, while politicians debated the implications of taking down the Confederate flag after the white supremacist murder of nine African Americans at Emmanuel AME Church and several arson fires on Black churches in the South that followed, Bree Newsome scaled the South Carolina state flag pole and took the flag down. Here is her explanation of why she took that action.

I realized that now is the time for true courage the morning after the Charleston Massacre shook me to the core of my being. I couldn’t sleep. I sat awake in the dead of night. All the ghosts of the past seemed to be rising. … 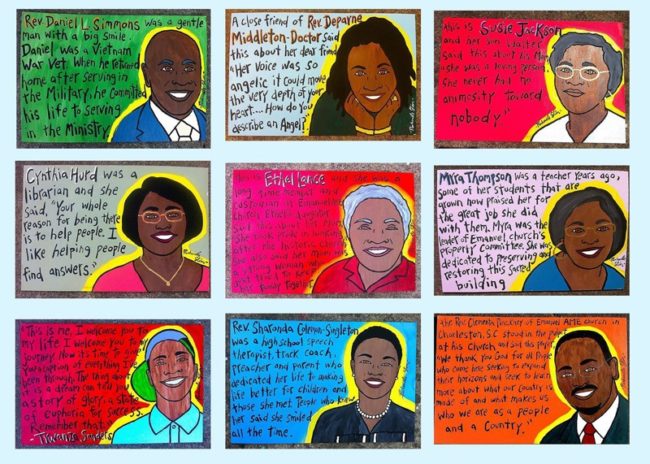 The day after the massacre I was asked what the next step was and I said I didn’t know. We’ve been here before and here we are again: Black people slain simply for being Black; an attack on the Black church as a place of spiritual refuge and community organization.

So, earlier this week I gathered with a small group of concerned citizens, both Black and white, who represented various walks of life, spiritual beliefs, gender identities and sexual orientations. Like millions of others in America and around the world, including South Carolina Governor Nikki Haley and President Barack Obama, we felt (and still feel) that the confederate battle flag in South Carolina, hung in 1962 at the height of the Civil Rights Movement, must come down. (Of course, we are not the first to demand the flag’s removal. Civil rights groups in South Carolina and nationwide have been calling for the flag’s removal since the moment it was raised, and I acknowledge their efforts in working to remove the flag over the years via the legislative process.)

We discussed it and decided to remove the flag immediately, both as an act of civil disobedience and as a demonstration of the power people have when we work together. Achieving this would require many roles, including someone who must volunteer to scale the pole and remove the flag. It was decided that this role should go to a Black woman and that a white man should be the one to help her over the fence as a sign that our alliance transcended both racial and gender divides. We made this decision because for us, this is not simply about a flag, but rather it is about abolishing the spirit of hatred and oppression in all its forms.

To all those who might label me an “outside agitator,” I say to you that humanitarianism has no borders. I am a global citizen. My prayers are with the poor, the afflicted, and the oppressed everywhere in the world, as Christ instructs. If this act of disobedience can also serve as a symbol to other peoples’ struggles against oppression or as a symbol of victory over fear and hate, then I know all the more that I did the right thing.

Even if there were borders to my empathy, those borders would most certainly extend into South Carolina. Several of my African ancestors entered this continent through the slave market in Charleston. Their unpaid toil brought wealth to America via Carolina plantations. I am descended from those who survived racial oppression as they built this nation: My 4th great grandfather, who stood on an auction block in South Carolina refusing to be sold without his wife and newborn baby; that newborn baby, my 3rd great grandmother, enslaved for 27 years on a plantation in Rembert, SC where she prayed daily for her children to see freedom; her husband, my 3rd great grandfather, an enslaved plowboy on the same plantation who founded a church on the eve of the Civil War that stands to this day; their son, my great-great grandfather, the one they called “Free Baby” because he was their first child born free, all in South Carolina.

You see, I know my history and my heritage. The Confederacy is neither the only legacy of the South nor an admirable one. The Southern heritage I embrace is the legacy of a people unbowed by racial oppression. It includes towering figures of the Civil Rights Movement like Ida B. Wells, Martin Luther King Jr., Fannie Lou Hamer, Rosa Parks, Medgar Evers and Ella Baker. It includes the many people who rarely make the history books but without whom there is no movement.

Bree Newsome: As SC Lawmakers Debate Removing Confederate Flag, Meet the Activist Who Took It Down

We also recommend “The True Charleston Killer Remains at Large: Racism, poverty and violence are the real killers in America” by Reverend William Barber II and the sermon Barber gave in January of 2016 at Riverside Church. Barber talks about the moral compass needed to guide the U.S. forward on a path of justice.

Book - Non-fiction. By James Loewen. 512 pages. 2019.
The mis-education provided by monuments and historic markers across the United States.