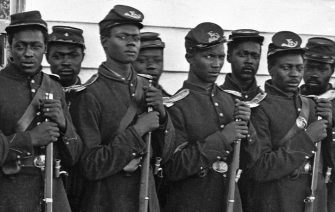 Though skirmishes continued for a short time and Juneteenth was months away, the U.S. Civil War ended on this day, April 9, 1865, when the Confederate Army of Northern Virginia surrendered to U.S. General Ulysses S. Grant at Appomattox Court House, a small village in south-central Virginia.

Three of these were United States Colored Infantry Regiments from the 25th U.S. Army Corps (the 29th, 31st, and 116th). They were among the first units to come into the city from the west, and a number of Confederates surrendered to these regiments. The 8th, 41st, and 45th U.S. Colored Infantry Regiments were assigned to positions at the rear. (Excerpted from the African American Historic Sites Database.)

James Loewen wrote in “Why Do People Believe Myths About the Confederacy? Because our textbooks and monuments are wrong“:

See Clint Smith III‘s Twitter thread, quoting Frederick Douglass’ lament over the rise of the “lost cause” narrative in 1871:

A good way to remember today’s anniversary of Confederate surrender at Appomattox is to read this 1871 speech by Frederick Douglass on how, only 6 years after the Civil War ended, he feared that history was already being rewritten to portray Lee & his army as honorable fighters:

Find resources below for teaching outside the textbook about the Civil War and Reconstruction, including a teaching guide edited by Adam Sanchez Teaching a People’s History of Abolition and the Civil War.