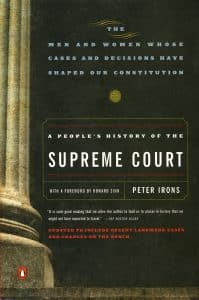 In A People’s History of the Supreme Court, Peter Irons chronicles the decisions that have influenced virtually every aspect of our society, from the debates over judicial power to controversial rulings in the past regarding slavery, racial segregation, and abortion, as well as more current cases about school prayer, the Bush/Gore election results, and “enemy combatants.”

A comprehensive history of the people and cases that have changed history, this is the definitive account of the nation’s highest court. [Publisher’s description.]

Howard Zinn writes in the foreword,

Although the Preamble to the United States Constitution begins with the words “We the People. . .,” the volumes upon volumes that deal with constitutional law are remarkably devoid of human beings. How many Americans, of the huge number who have heard of Brown v. Board of Education, know that “Brown” refers to Oliver Brown and his eight-year-old daughter Linda in Topeka, or know anything about the long struggle of their family to bring the case before the highest court in the land?

How many, even if they have studied constitutional law and argued the case of Tinker v. Des Moines, know (unless they have read Peter Irons’s wonderful book The Courage of Their Convictions) the human story of Mary Beth Tinker, the thirteen-year-old suspended from school in 1965 for wearing a black armband in school to protest the war in Vietnam?

It is this situation that Peter Irons has set out to remedy, with a history of the Supreme Court that breathes life into the dry language of the judicial system, that looks behind the cases to the human beings crucial to the cases but long forgotten, that examines the realities of social conflict beneath the surface of legal argument.

The document created by the Founding Fathers was born of intense conflicts of race and class, yet there has always been a certain aura of disinterestedness around the decisions of the Supreme Court, notwithstanding the adversarial character of the cases before it. [For more by Zinn, read “Don’t Despair About the Supreme Court” in The Progressive, Nov. 2005.]

Peter H. Irons is a political activist, civil rights attorney, legal scholar, and professor emeritus of political science. In 1960, Peter Irons returned his draft card to the Selective Service and explained that he would not serve in the military because the U.S. allowed racial segregation. In 1964, a federal grand jury indicted Irons for not complying with orders to be inducted for military service. In prison, Irons discovered the books of Howard Zinn. Irons admired Zinn’s thinking, and he began to correspond with Zinn.

As the date for Irons’s probation eligibility approached, he asked Zinn to send him a graduate school application. Zinn responded, explaining that Irons had been admitted to the doctoral program in political science at Boston College with a full scholarship.

Irons was released from prison in February 1969 and started graduate school the day after his release. Irons completed a doctorate at Boston University in 1973.

Afterwards, Zinn helped arrange for him to work at a law firm defending Daniel Ellsberg, who was under federal prosecution at the time for stealing the Pentagon Papers. His work at the law firm would later serve as motivation for him to pursue a law degree from Harvard Law School, which he received in 1978. 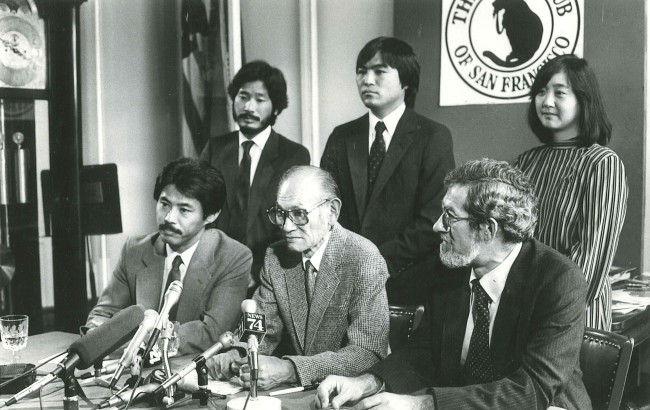 Continue reading this bio on the Densho Encyclopedia, including Irons’ role in case of Fred Korematsu. Also read Irons’ entry about his role in the Freedom Movement at CRMvet.org.

“Presenting a sophisticated narrative history of the Supreme Court, Irons (The Courage of Their Convictions) illustrates the beguiling legacy left by the Constitution’s framers, who conjured up the high Court without providing an instruction manual. Irons is clear about where his ideological sympathy lies, calling Justice William Brennan ‘my judicial ideal and inspiration’ and quoting Brennan’s famous formulation that ‘the genius of the Constitution’ rests in ‘the adaptability of its great principles to cope with current problems and current needs.’

“Irons traces the development of the Court’s peculiar institutional workings from its first proceedings under Chief Justice John Jay to the struggle for individual liberties during the successive Warren, Burger and Rehnquist Courts. In characterizing the Court as a bastion of racism, classism, and sexism prior to Earl Warren’s ascendancy, he often tends to use extended arguments when quick jabs would suffice. But as he delves into the personalities of litigants, justices and senators (who, as far back as 1831, fought fiercely over the confirmations of Supreme Court nominees), Irons proves himself a master of American legal and political history. He is particularly lucid when recounting how Reconstruction reforms, such as the Fourteenth Amendment, that were intended to ensure the liberties of individuals were co-opted by the Gilded Age Court to protect the liberties of business. Irons combines careful research with a populist passion.

“In doing so, he breathes abundant life into old documents and reminds readers that today’s fiercest arguments about rights are the continuation of the endless American conversation.” —Publishers Weekly 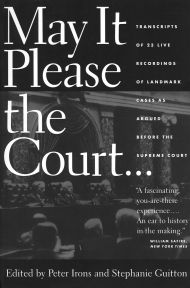 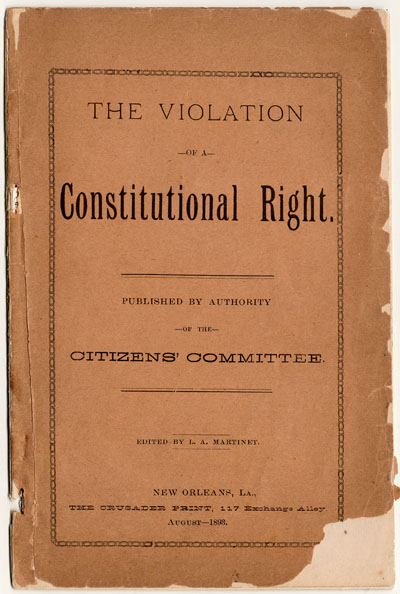 Film. By William Elwood. 1990. 56 min.
The little known story of Charles Hamilton Houston who paved the road to Brown v. Board.

The Supreme Court declared in horrific Dred Scott v. Sandford ruling that “Any person descended from Africans, whether slave or free, is not a citizen of U.S.” 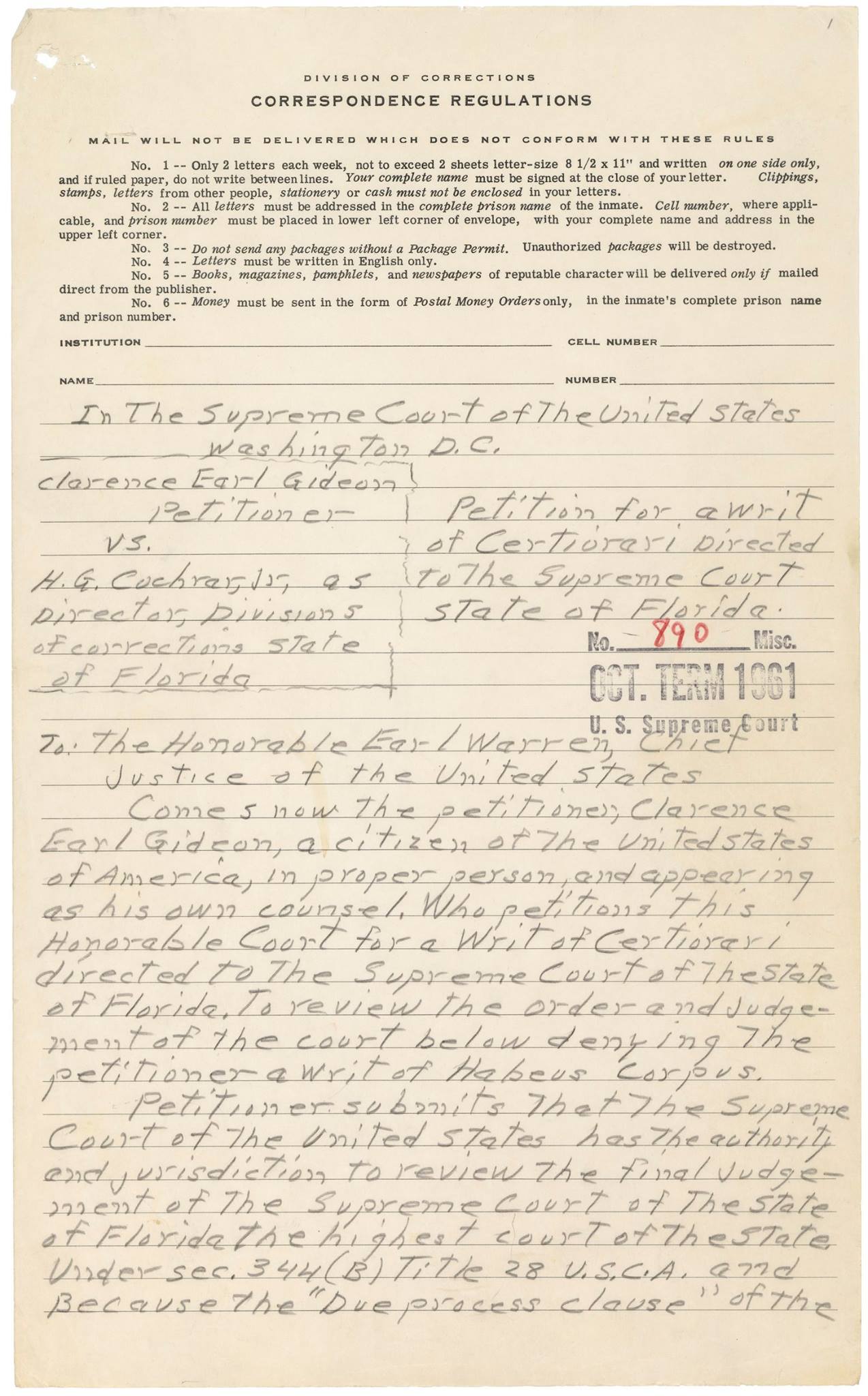 The ruling of Gideon v. Wainwright required states to provide counsel in criminal cases to represent defendants who are unable to afford to pay their own attorneys. 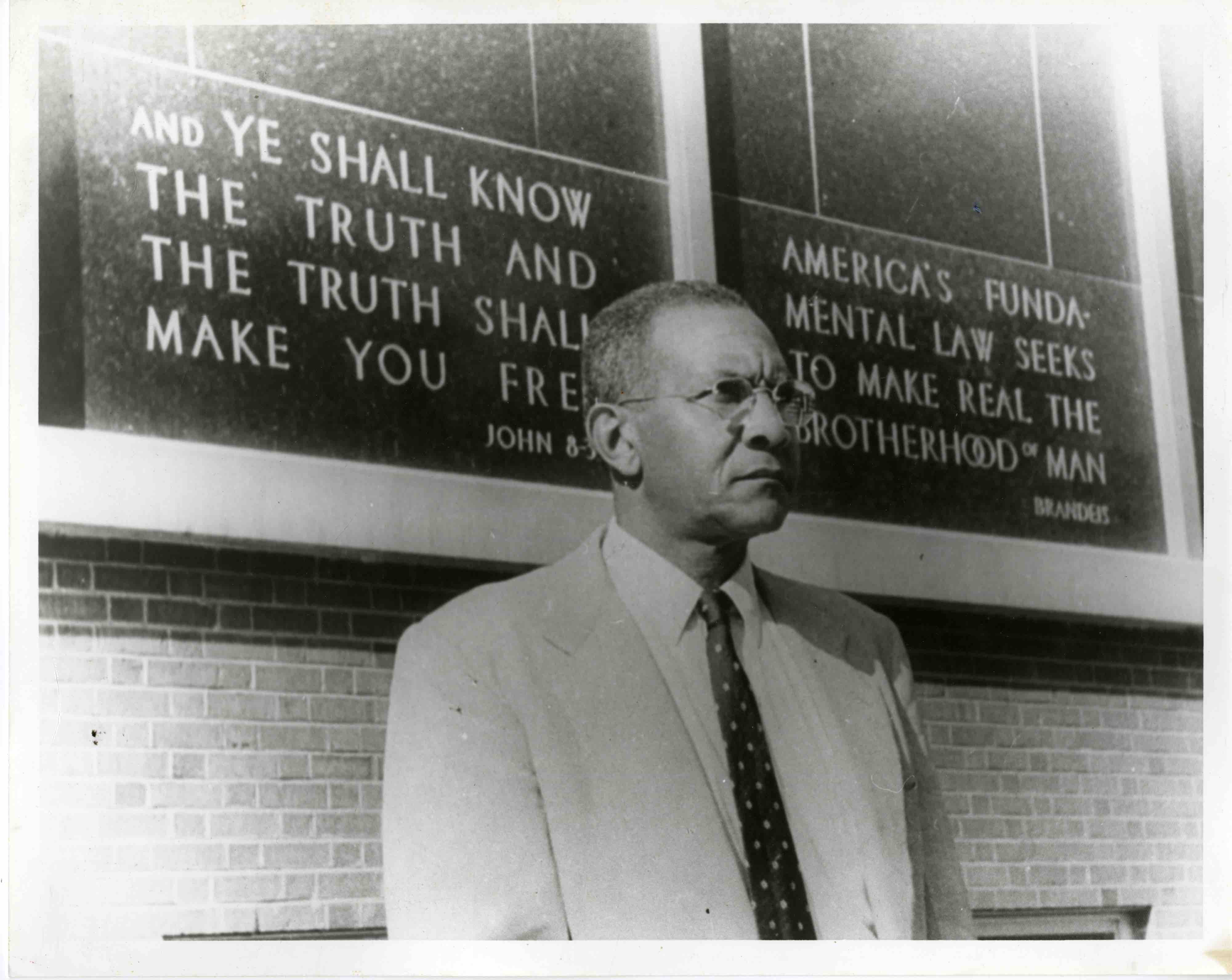 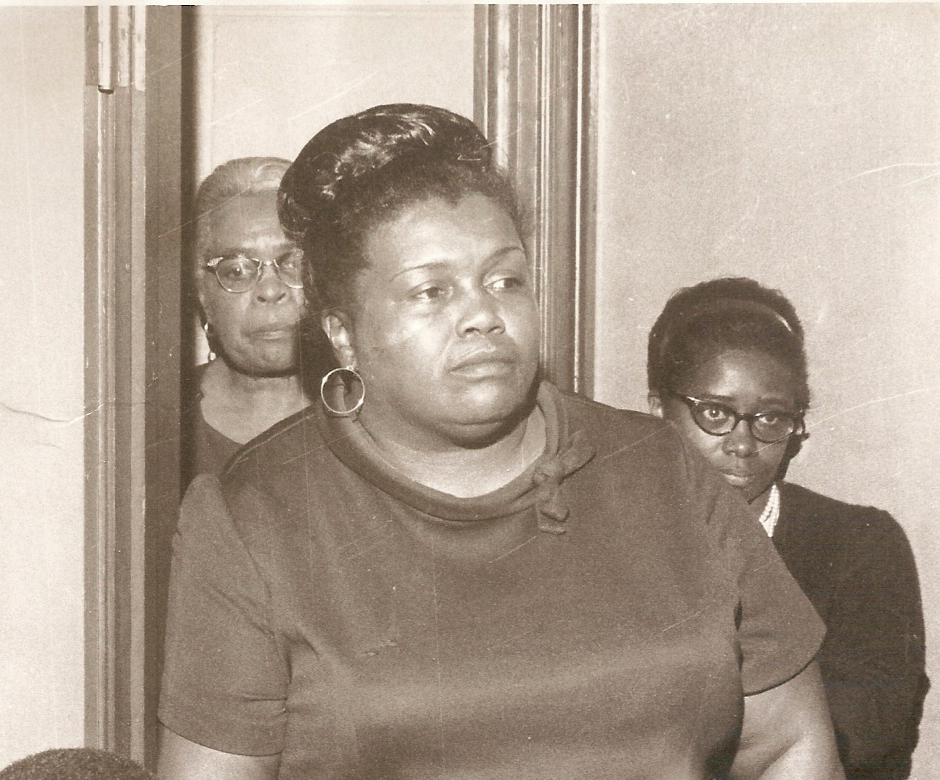 The Supreme Court ruled that schools had to desegregate “immediately,” instead of the previous ruling of “with all deliberate speed.”