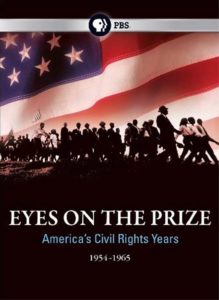 Eyes on the Prize is an award-winning 14-hour television series produced by Blackside and narrated by Julian Bond. Through contemporary interviews and historical footage, the series covers all of the major events of the civil rights movement from 1954-1985.

Series topics range from the murder of Emmett Till and the Montgomery Bus Boycott to the 1965 Voting Rights Act; from community power in schools to “Black Power” in the streets.

The series won six Emmys and numerous other awards, including an Academy Award nomination, the George Foster Peabody Award, and the top duPont-Columbia award for excellence in broadcast journalism.

Eyes on the Prize was created and executive produced by Henry Hampton (1940-1998), one of the most influential documentary filmmakers in the 20th century. Blackside, the independent film and television company he founded in 1968, completed 60 major films and media projects.  [Description from PBS website.]

Purchase Eyes on the Prize

Bree Newsome on Eyes on the Prize

In this short clip, Bree Newsome describes the impact of watching Eyes on the Prize on her own life of activism.

Description of the Segments and Contents

Awakenings (1954-1956)
Individual acts of courage inspire black Southerners to fight for their rights: Mose Wright testifies against the white men who murdered young Emmett Till, and Rosa Parks refuses to give up her bus seat to a white man in Montgomery, Alabama.

Fighting Back (1957-1962)
States’ rights loyalists and federal authorities collide in the 1957 battle to integrate Little Rock’s Central High School, and again in James Meredith’s 1962 challenge to segregation at the University of Mississippi. Both times, a Southern governor squares off with a U.S. president, violence erupts — and integration is carried out.

Ain’t Scared of Your Jails (1960-1961)
Black college students take a leadership role in the civil rights movement as lunch counter sit-ins spread across the South. “Freedom Riders” also try to desegregate interstate buses, but they are brutally attacked as they travel.

No Easy Walk (1961-1963)
The civil rights movement discovers the power of mass demonstrations as the Rev. Martin Luther King, Jr. emerges as its most visible leader. Some demonstrations succeed; others fail. But the triumphant March on Washington, D.C., under King’s leadership, shows a mounting national support for civil rights. President John F. Kennedy proposes the Civil Rights Act.

Bridge to Freedom (1965)
A decade of lessons is applied in the climactic and bloody march from Selma to Montgomery, Alabama. A major victory is won when the federal Voting Rights Bill passes, but civil rights leaders know they have new challenges ahead.

The Time Has Come (1964-66)
After a decade-long cry for justice, a new sound is heard in the civil rights movement: the insistent call for power. Malcolm X takes an eloquent nationalism to urban streets as a younger generation of black leaders listens. In the South, Stokely Carmichael and the Student Nonviolent Coordinating Committee (SNCC) move from “Freedom Now!” to “Black Power!” as the fabric of the traditional movement changes.

Power! (1966-68)
The call for Black Power takes various forms across communities in black America. In Cleveland, Carl Stokes wins election as the first black mayor of a major American city. The Black Panther Party, armed with law books, breakfast programs, and guns, is born in Oakland. Substandard teaching practices prompt parents to gain educational control of a Brooklyn school district but then lead them to a showdown with New York City’s teachers’ union.

The Promised Land (1967-68)
Martin Luther King stakes out new ground for himself and the rapidly fragmenting civil rights movement. One year before his death, he publicly opposes the war in Vietnam. His Southern Christian Leadership Conference (SCLC) embarks on an ambitious Poor People’s Campaign. In the midst of political organizing, King detours to support striking sanitation workers in Memphis, where he is assassinated. King’s death and the failure of his final campaign mark the end of a major stream of the movement.

Ain’t Gonna Shuffle No More (1964-72)
A call to pride and a renewed push for unity galvanize black America. World heavyweight champion Cassius Clay challenges America to accept him as Muhammad Ali, a minister of Islam who refuses to fight in Vietnam. Students at Howard University in Washington, D.C., fight to bring the growing black consciousness movement and their African heritage inside the walls of this prominent black institution. Black elected officials and community activists organize the National Black Political Convention in Gary, Indiana, in an attempt to create a unified black response to growing repression against the movement.

A Nation of Law? (1968-71)
Black activism is increasingly met with a sometimes violent and unethical response from local and federal law enforcement agencies. In Chicago, two Black Panther Party leaders are killed in a pre-dawn raid by police acting on information supplied by an FBI informant. In the wake of President Nixon’s call to “law and order,” stepped-up arrests push the already poor conditions at New York’s Attica State Prison to the limit. A five-day inmate takeover calling the public’s attention to the conditions leaves 43 men dead: four killed by inmates, 39 by police.

The Keys to the Kingdom (1974-80)
In the 1970s, anti-discrimination legal rights gained in past decades by the civil rights movement are put to the test. In Boston, some whites violently resist a federal court school desegregation order. Atlanta’s first black mayor, Maynard Jackson, proves that affirmative action can work, but the Bakke Supreme Court case challenges that policy.

Back to the Movement (1979-mid 80s)
Power and powerlessness. Miami’s black community — pummeled by urban renewal, a lack of jobs, and police harassment — explodes in rioting. But in Chicago, an unprecedented grassroots movement triumphs. Frustrated by decades of unfulfilled promises made by the city’s Democratic political machine, reformers install Harold Washington as Chicago’s first Black mayor.

All of the interviews from Eyes on the Prize I and II are available online with full text search capability. These interviews are part of the Henry Hampton Collection housed at the Film and Media Archive at Washington University Libraries. Each transcript represents the entire interview conducted by Blackside including sections which appeared in the final program and the outtakes. This project is part of Washington University’s Digital Gateway and was produced by Digital Library Services and the Film and Media Archive. This invaluable resource is available for free online.

The Making of Eyes on the Prize: Reframing the Civil Rights Movement

The March on Washington Film Festival, in partnership with the SNCC Legacy Project, hosted a webinar on Eyes on the Prize in June of 2020. A screening of short clips was followed by a conversation with those who helped shape the 14-hour series. It was moderated by high school teacher Jessica A. Rucker. 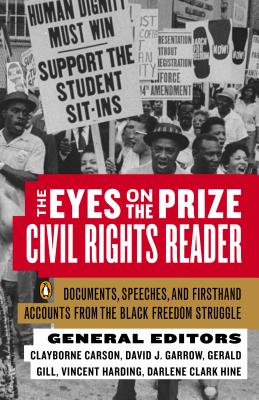