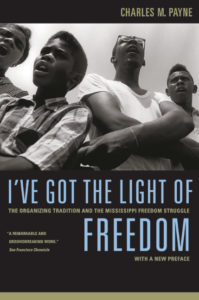 Payne overturns familiar ideas about community activism in the 1960s. The young organizers who were the engines of change in the state were not following any charismatic national leader. Far from being a complete break with the past, their work was based directly on the work of an older generation of activists, people like Ella Baker, Septima Clark, Amzie Moore, Medgar Evers, Aaron Henry.

While historians have commonly portrayed the movement leadership as male, ministerial, and well-educated, Payne finds that organizers in Mississippi and elsewhere in the most dangerous parts of the South looked for leadership to working-class rural Blacks, and especially to women. Payne also finds that Black churches, typically portrayed as front runners in the civil rights struggle, were in fact late supporters of the movement. [Publisher’s description.]

“I was surprised at how much there is for myself and other movement people to learn about the Mississippi freedom struggle from Charles Payne’s book.”—Bob Moses, SNCC Field Secretary, Mississippi, 1961-1965

“A superb and important book, remarkably astute in its judgments and strikingly sophisticated in its analyses. Impressively original, it is one of the most significant studies of the Black freedom struggle yet published.”—David J. Garrow, author of the Pulitzer Prize-winning Bearing the Cross

“A compelling story of the black freedom struggle in the Mississippi Delta. Charles Payne has written the definitive study of the civil rights movement in the Delta. Through his superb use of oral history interviews, Payne reveals the courage, passion, humor, and dedication of thousands of black women and men who worked, against overwhelming odds, to take charge of their destiny. This is the most comprehensive and revealing study of organizing on the grass-roots level that we have, and will be invaluable to scholars, students, and activists alike.”—John Dittmer, author of Local People

“No book on the movement–perhaps any movement–does a better job of capturing the ‘feel’ of organizing and the slow, incremental accretion of shared experiences that are responsible for the dramatic victories that the history books record.”—Doug McAdam, author of Freedom Summer 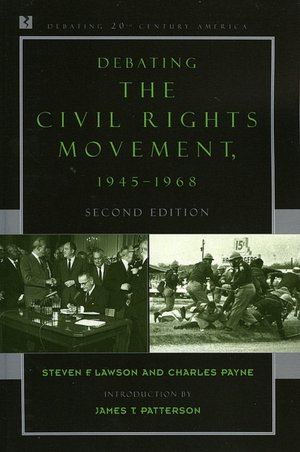 Book - Non-fiction. By Stephen Lawson and Charles Payne. 2006. Introduces and examines the complex story of the modern Civil Rights Movement as it should be taught, providing key background information and analysis for teachers.