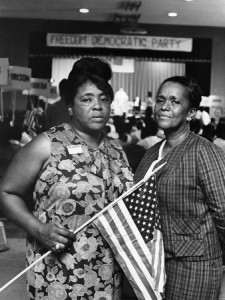 Is this America,
the land of the free and the home of the brave,
where our lives be threatened daily,
because we want to live as decent human beings?

Mississippi sharecropper Fannie Lou Hamer asked the question above of the Credentials Committee on August 22, 1964, gripping the nation with her televised testimony of being forced from her home and brutally beaten for attempting to exercise her constitutional right to vote.

Hamer, along with the rest of the Mississippi Freedom Democratic Party (MFDP) delegates, demanded to be seated at the Democratic National Convention (Aug. 24-27, 1964), in Atlantic City, New Jersey. Their goal was to have the nation finally live up to the democratic ideal of “one man [person], one vote.”

As Julian Hipkins III and Deborah Menkart write about the MFDP,

This delegation of grassroots citizens from behind the “cotton curtain” forced the Democratic Convention and the nation to grapple with the choice — would the all-white, top-down, good ol’ boy, “regular delegation” be seated, despite the fact that they had used state-sponsored terrorism and violated the Constitution to keep out African Americans and also many poor whites? Or would the delegation that had followed the rules and opened its doors to all — regardless of race, gender, literacy, and employment — be selected to represent the state?

This question of citizenship and political representation is as important today as it was then — yet the Mississippi Freedom Democratic Party is not even mentioned in many major U.S. history textbooks. Vital lessons about the possibilities of grassroots democracy are lost to our next generation of voters.

Read more about the MFDP in the article, “‘Is This America?’: 50 Years Ago Sharecroppers Challenged Mississippi Apartheid, LBJ, and the Nation” and view related resources on the Mississippi Freedom Democratic Party. Find related lessons and other teaching resources below.