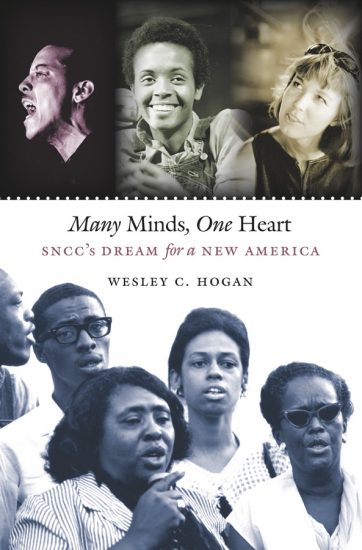 How did the Student Nonviolent Coordinating Committee (SNCC) break open the caste system in the American South between 1960 and 1965? In this innovative study, Wesley Hogan explores what SNCC accomplished and, more important, how it fostered significant social change in such a short time. She offers new insights into the internal dynamics of SNCC as well as the workings of the larger civil rights and Black Power movement of which it was a part.

As Hogan chronicles, the members of SNCC created some of the civil rights movement’s boldest experiments in freedom, including the sit-ins of 1960, the rejuvenated Freedom Rides of 1961, and grassroots democracy projects in Georgia and Mississippi. She highlights several key players — including Charles Sherrod, Bob Moses, and Fannie Lou Hamer — as innovators of grassroots activism and democratic practice.

Breaking new ground, Hogan shows how SNCC laid the foundation for the emergence of the New Left and created new definitions of political leadership during the civil rights and Vietnam eras. She traces the ways other social movements — such as Black Power, women’s liberation, and the antiwar movement — adapted practices developed within SNCC to apply to their particular causes.  [Publisher’s description.]

Wesley Hogan is the Director of the Center for Documentary Studies at Duke. She works on the history of youth social movements, African-American history, women’s history and oral history. Her book on SNCC, Many Minds, One Heart: SNCC and the Dream for a New America (2007), won the Lillian Smith Book Award, the Scott-Bills Memorial Prize for best work in peace history, and the Library of Virginia nonfiction literary award. She was the co-director of the Institute for the Study of Race Relations from 2006-2009, whose mission is to bring together community organizers, researchers, and young leaders to promote healthy communities. Between 2004-2008, she worked with the Algebra Project, the Young People’s Project and the Petersburg City Public Schools, and coordinated an oral history project of the civil rights movement in Petersburg. She is the author of On the Freedom Side on twentieth-century freedom struggles.