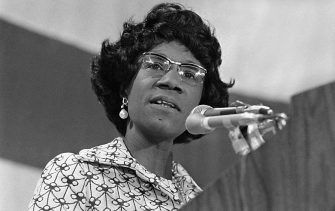 Shirley Chisholm was born on Nov. 30, 1924. In 1969, Chisholm was the first Black woman elected to the U.S. Congress and was re-elected six times until she retired from political office in 1983.

Starting her career as an early childhood teacher, Chisholm spoke out for civil rights and women’s rights, advocated for the poor, and opposed the Vietnam War.

Learn about Chisholm’s experiences growing up and as an educator that led to her political activism in the podcast, Stuff You Missed in History Class.

In a commencement and graduation speech at Greenfield High in 1983, she said,

But, my friends, the conservatives desire to pry the lid off the coffin and so our confrontation then must be against the grave robbers. Our coalition has got to keep the lid nailed down tight and the wheels of progress turning and rolling once again. Our coalition still has miles to go. The bad, old days may be dead, my friends, but there are still plenty of ghosts roaming around.

She ran for the Democratic nomination for President in 1972 and used the slogan “Unbought and Unbossed.”