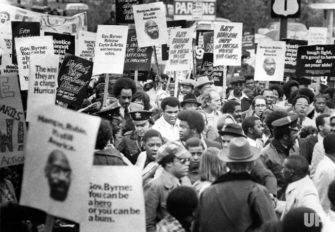 Oct. 17, 1975 About 1,600 demonstrators, led by the heavyweight boxing champion, Muhammad Ali, rallied outside the State House here today in support of clemency for Rubin (Hurricane) Carter and John Artis.

On November 7, 1985, U.S. District Court Judge H. Lee Sarokin handed down his decision to free Carter, stating that “The extensive record clearly demonstrates that [the] petitioners’ convictions were predicated upon an appeal to racism rather than reason, and concealment rather than disclosure.”

For a man who spent nearly four decades of his 76 years under the restrictive eye of the U.S. correctional system, few have ever touched as many lives as Rubin “Hurricane” Carter.

The world-class boxer turned wrongfully accused prisoner, turned advocate for the rights of the unjustly incarcerated, has succumbed to cancer, but his memory and work will endure as long as there are people outside and inside the prisons of the world fighting for justice.

Continue reading “On the Death and Life’s Work of the Unconquerable Rubin ‘Hurricane’ Carter” by Dave Zirin in The Nation.