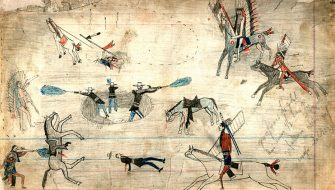 A Kiowa ledger drawing possibly depicting the Buffalo Wallow battle in 1874, a fight between Southern Plains Indians and the U.S. Army during the Red River War.

On Sept. 28, 1874, encampments of Comanches, Kiowas, Kiowa Apaches, Cheyennes, and Arapahos were attacked by the Fourth United States Cavalry in the Palo Duro Canyon.

The Cavalry forced the indigenous people to leave their belongings as they were violently run off their land. 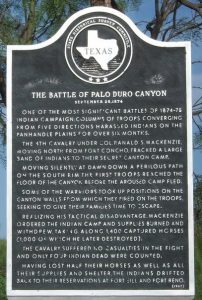 Whose perspective is this marker told from? (Click for larger view.)

Many fought back and resisted, but still their homes were burned and winter goods stolen.

The Fourth Cavalry took more than 1,000 horses from the encampment to a canyon where they slaughtered them. They stole about 300 more for their own purposes. This was done to ensure that the Plains Indians would be immobilized and therefore could not sustain their community.

The Battle of Palo Duro Canyon was a major battle of the Red River War, a military campaign to forcibly move Southern Plains Indians to reservations in the Indian Territory.

Thanks to Erik Barnhill for suggesting this post. He had travelled to the area and was dismayed to see markers that describe this tragic event as a “victory.”