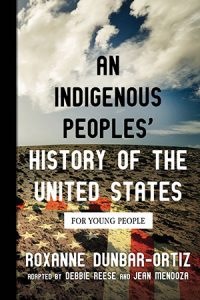 The original academic text, An Indigenous Peoples’ History of the United States, is fully adapted by renowned curriculum experts Debbie Reese and Jean Mendoza, for middle-grade and young adult readers to include discussion topics, archival images, original maps, recommendations for further reading, and other materials to encourage students, teachers, and general readers to think critically about their own place in history. [Description by publisher.]

The young reader’s edition of An Indigenous Peoples’ History of the United States is by Debbie Reese and Jean Mendoza, based on the original edition by Roxanne Dunbar-Ortiz. Photos of Reese and Mendoza by Durango Mendoza.

An important corrective to conventional narratives of our nation’s history . . . . An accessible, engaging, and necessary addition to school libraries and classrooms. An excellent read, dismantling American mythologies and fostering critical reasoning about history and current events. —Kirkus Reviews, Starred Review

This adaptation of An Indigenous Peoples’ History of the United States (2014) should be required reading for all middle and high schoolers—and their teachers . . . . There is much to commend here: the lack of sugar-coating, the debunking of origin stories, the linking between ideology and actions, the well-placed connections between events past and present, the quotes from British colonizers and American presidents that leave no doubt as to their violent intentions . . . . The resistance continues, and this book urges all readers to consider their own roles, whether as bystanders or upstanders. —Booklist, Starred Review

Teaching Activity. By Bill Bigelow.
A lesson in which students develop critical literacy skills by responding to Andrew Jackson’s speech on “Indian Removal.”

Teaching Activity. By Bill Bigelow.
What led up to the Trail of Tears? In this lesson, students learn about the decision to remove the Cherokee and Seminole people from their lands.

Teaching Activity. By Bill Bigelow. 9 pages. Rethinking Schools.
A trial role play asks students to determine who is responsible for the death of millions of Taínos on the island of Hispaniola in the late 15th century.

Teaching activity. By Ursula Wolfe-Rocca.
A lesson about multiple cohorts of climate activists: Indigenous leaders in the Climate Justice Movement, valve turners using civil disobedience to stop the flow of oil, and the legal team that uses the “necessity defense” in the courts.