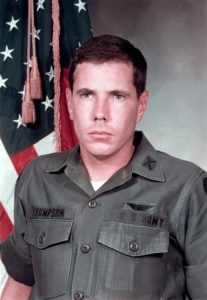 On March 16, 1968, between 347 and 504 unarmed Vietnamese adults and children were killed (some of the women and children were gang raped first) by U.S. Army soldiers in what became known as the Mỹ Lai Massacre.

Before the last few survivors were about to be killed by U.S. soldiers, Chief Warrant Officer Hugh Thompson Jr. and his helicopter crews arrived on the scene and took a stand, preventing the last few people from being murdered.

Thompson blocked fellow U.S. troops with his helicopter, had his crew train machine guns on them, and rescued a group of civilian Vietnamese villagers hiding in a bunker.

In 1970, Thompson testified in a closed hearing in Congress about what he saw. Congressman Mendel Rivers (D-S.C.) stated that Thompson was the only soldier at My Lai who should be punished and attempted to have him court-martialed for turning his weapons on fellow troops. As the U.S. government tried to cover up the massacre, Thompson was vilified and he received death threats.

Learn more from the ballad “Song for Hugh Thompson” below by David Rovics.

The book Kill Anything That Moves: The Real American War in Vietnam by Nick Turse exposes, the Mỹ Lai Massacre was not the exception. Learn more from this Democracy Now! broadcast.

David Rovics explains why he wrote the “Song for Hugh Thompson“:

I was in a wonderful café (Hyperion Espresso) in Fredericksburg, Virginia, when I read in the paper about this helicopter pilot who landed in My Lai near the end of this horrible massacre perpetrated upon Vietnamese peasants by American troops. I never knew until I read this article that certain American troops were also involved with finally putting an end to it.

The only reason Hugh Thompson’s heroic story emerged after thirty years was because the government of Vietnam was preparing to give him a medal for his actions, and the U.S. Army decided it wanted to try to avoid being upstaged. Hugh Thompson died on January 6, 2006, and his friends played the song at his funeral.

Hugh Thomson was a pilot, just like many more
Fighting for Old Glory on a far-off, foreign shore
He was on a lethal mission, only one of many
Following his orders to kill the enemy, to kill the enemy

He flew low above the village, searching for the foe
When he saw a wounded child on the path below
He thought this to be a sure sign that the enemy was near
So he radioed for back-up and more choppers did appear…

“Help the wounded,” he cried out, “and beware of an attack”
And then the child died by a bullet through her back
And when he looked around for the culprits of the scene
It was a company of men in U.S. military green…

The dead were in the hundreds, strewn all around
In this place called My Lai, which once had been a town
There was a hut of huddled children, soldiers had them in their sights
Hugh decided at that moment to fight for what was right…” Train your weapons on the G.I.’s,” and his ‘copter crews obeyed
And stood among the children, tattered and afraid
The whole town had been murdered, but for some kids and widowed wives
And Hugh Thomson made sure that those remaining would survive…

The audio online and MP3 download for “Song for Hugh Thompson” can be found here.

Students can also read about Ron Ridenhour who brought international attention to My Lai. The letter he wrote to Congress and the Pentagon is online.

Find resources below for teaching about the Vietnam War. 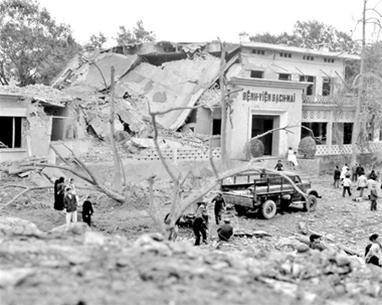