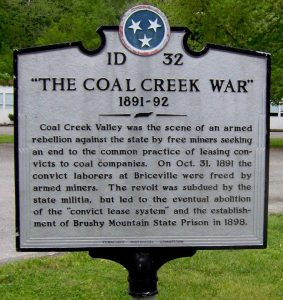 On Oct. 31, 1891, during the Coal Creek War labor uprising to protest convict leasing, a group of miners seized the Knoxville Iron Company stockade at Coal Creek in Tennessee.

The “convict lease system” was a private-public partnership in which prisoners were leased to private companies for their labor. The convict lease system was used to undermine union organizing and perpetuate a form of slavery by imprisoning African Americans on false charges and forcing them to provide free labor. Of the 120 men brought in to work in the mines for the Tennessee Iron Company at Coal Creek, only five were identified as white. (See the documentary film Slavery by Another Name.)

Over the course of the convict wars, striking miners freed hundreds of convicts. In some cases, the miners provided them with fresh food and civilian clothes.

What the marker below does not mention is that while this contributed to the official end of convict leasing in Tenn., inmates at the Brushy Mountain State Penitentiary were forced to mine coal for the state. In fact, the mine mouth opened within the prison walls and coal was shipped via a convict-built railroad spur.

Read more in The Stockade Stood Burning: rebellion and the convict lease in Tennessee’s coalfields, 1891-1895 from the book Dixie be damned: 300 years of insurrection in the American South by Neal Shirley and Saralee Stafford. 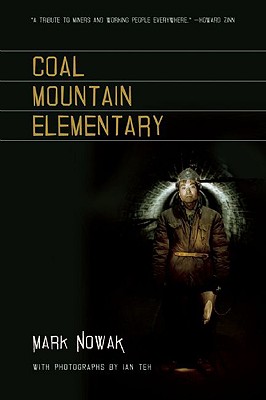