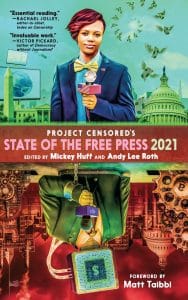 The news-monitoring group Project Censored updates its longstanding yearbook series, Censored, with State of the Free Press 2021. This edition offers a succinct and comprehensive survey of the most important but underreported news stories of 2020; in addition to a comparative analysis of the current state of corporate and independent news media, and its effect on democracy.

The corporate media sustains a decrepit post-truth era, as examined the lowlight features: Junk Food News-frivolous stories that distract the public from actual news-and-News Abuse-important stories covered in ways that undermine public understanding. The alternative media provokes a burgeoning critical media literacy age, as evaluated in the highlight feature: Media Democracy in Action-relevant stories responsibly reported on by independent organizations. Finally, in an homage to the history of the annual report, the editors reinstate the D j vu News feature-revisited stories from previous editions. State of the Free Press 2021 endows readers with the critical thinking and media literacy skills required to hold the corporate media to account for distorting or censoring news coverage, and thus, to revitalize our democracy.

Project Censored, founded in 1976 , has as its principal objective the advocacy for and protection of First Amendment rights, including freedom of information. In 2008, Project Censored received the PEN/Oakland Literary Censorship Award. Most recently, Project Censored received the 2014 Pillar Award in Journalism and New Media, given annually to persons of conscience, conviction, and achievement who stand up for what’s right and what’s true in the face of corporate and political intimidation. [Publisher’s description.]