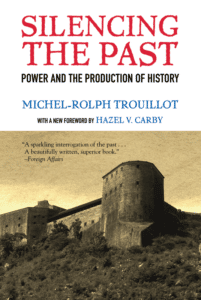 Haitian scholar, professor, and writer Michel-Rolph Trouillot wrote in the preface to Silencing the Past: Power and the Production of History:

I grew up in a family where history sat at the dinner table. All his life my father engaged in a number of parallel professional activities, none of which defined him, but most of which were steeped in his love of history . . .

We are never as steeped in history as when we pretend not to be, but if we stop pretending we may gain in understanding what we lost in false innocence. Naiveté is often an excuse for those who exercise power. For those upon whom that power is exercised, naiveté is always a mistake.

This book is about history and power. It deals with the many ways in which the production of historical narratives involves the uneven contribution of competing groups and individuals who have unequal access to the means for such production. The forces I will expose are less visible than gunfire, class property, or political crusades. I want to argue that they are no less powerful.

I also want to reject both the naïve proposition that we are prisoners of our pasts and the pernicious suggestion that history is what we make of it. History is the fruit of power, but power itself is never so transparent that its analysis becomes superfluous. The ultimate mark of power may be its invisibility; the ultimate challenge, the exposition of its roots.

Trouillot passed away in 2012. Here is a brief bio from the Haiti Press Network (HPN):

This brilliant intellectual and academic, HPN reports from a family communication, “always looked with intelligence, passion and sensitivity on Haiti’s social issues and leaves behind a body of work that is an indispensable reference for any discussion of Haitian realities and the social sciences in general.”

Author of numerous books and articles, Michel-Rolph Trouillot had been a professor of anthropology and social science at Johns Hopkins University and more recently the University of Chicago. His work as a researcher and intellectual addressed the relationship between historicity and power, the epistemology of social sciences, the historical evolution of Caribbean peoples, their emergence from the economic and cultural circumstances of slavery, their uneven integration into the global economy, and their relationship to capital and the state. His books include Haiti: State Against Nation, The Origins and Legacy of Duvalierism, Silencing the Past: Power and the Production of History, and Global Transformations: Anthropology and the Modern World.