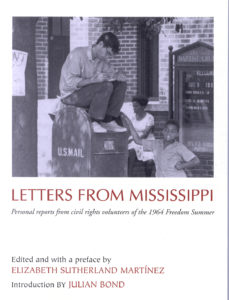 During the summer of 1964, a presidential election year, SNCC (Student Nonviolent Coordinating Committee) sent volunteers into Mississippi to expand Black voter registration in the state, to organize a legally constituted “Freedom Democratic Party” that would challenge the whites-only Mississippi Democratic party, to establish “freedom schools” which taught reading and math to Black children, and to open community centers where individuals could obtain legal and medical assistance.

This expanded version of Letters from Mississippi retains the introduction by Julian Bond, while updating the biographies of over a dozen volunteers from that summer, and, most important, adds over 40 pages of poetry that was written by students in the Freedom Schools, along with the original preface by Langston Hughes. [Publisher’s description.]

“I am so grateful readers have been given this new opportunity to hear the story of Freedom Summer told directly by some of the young people who helped make that extraordinary moment happen. Letters from Mississippi gives us a deeply personal look at one of the Civil Rights Movement’s key moments — and reminds us that change happens because regular people have decided they were willing to fight for it.” —Marian Wright Edelman, president, Children’s Defense Fund

“These letters in perceptiveness, freshness of detail and description, variety of events and situations, and range of experience are unlike anything I’ve since encountered in civil rights literature. Collectively, they constitute an irreplaceable record of an extraordinary movement in American social and cultural history at midcentury.” —Ekwueme Michael Thelwell