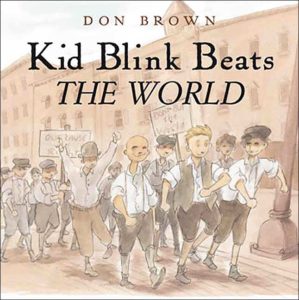 “Ain’t that ten cents worth as much to us as it is to Hearst and Pulitzer who are millionaires? Well, I guess it is. If they can’t spare it, how can we? . . . I’m trying to figure out how ten cents on a hundred papers can mean more to a millionaire than it does to newsboys, an’ I can’t see it.” —Kid Blink, 1899

In the summer of 1899, the hundreds of newsies who sold Randolph Hearst’s Journal and Pulitzer’s World on the streets of New York and surrounding cities went on strike. The issue was a penny — the extra penny that the press owners wanted to charge the newsboys to buy the papers. To the press owners it didn’t seem like much, but to the newsboys it was a living, and they fought. Led by kids with colorful names like Kid Blink, Race Track Higgins, Tiny Tim, and Crutch Morris, they refused to sell the papers, staged rallies — and finally brought the newspapers to the negotiating table.  [Publisher’s description.]

Read a review of the film Newsies by an 8-year-old reporter for IndyKids: A free paper for free kids!