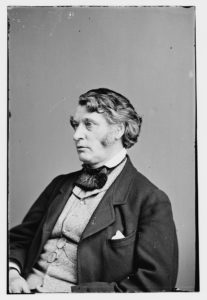 “From the beginning of our history the country has been afflicted with compromise. It is by compromise that human rights have been abandoned.” — Senator Charles Sumner

Charles Sumner (Jan. 6, 1811 – Mar. 11, 1874) was a U.S. senator from Massachusetts. He was also a lawyer, powerful orator, leader of the anti-slavery forces in Massachusetts, and a leader of the Radical Republicans. He advocated for full recognition of Haiti, against the U.S.-Mexico War, for true Reconstruction with land distribution, against school segregation, and more.

On May 22, 1856, a couple of days after Charles Sumner gave his famous anti-slavery speech, “Crime Against Kansas,” he was beaten so badly in the Senate chambers that he could not return to office for three years.

George William Curtis recounted in his eulogy for Sumner on June 9, 1874 in the Boston Music Hall, that

When I argued with him [Charles Sumner] that opponents might be sincere, he thundered reply, “Upon such a question, there is no other side.”

Sarah’s Long Walk: The Free Blacks of Boston and How Their Struggle for Equality Changed America: On February 15, 1848, Benjamin Roberts filed the first school desegregation suit after his daughter Sarah was barred from a white school in Boston, Mass. The plaintiff’s attorneys were Charles Sumner and Robert Morris, one of the country’s first African-American lawyers. This was the first trial case about school segregation and indirectly related to the 1855 ban of segregated schools in all of the state of Massachusetts and the 1954 ban on segregated schools nationally.