Albion Tourgée was a Reconstruction era lawyer, judge, politician, diplomat, and novelist. However, few in his hometown of Kingsville, Ohio had heard of his name. A group of students at Kent State University-Ashtabula helped change that with a public marker and adding the story of Tourgée to display of local heroes at the town’s high school. Their professor, Richard Dana, describes the process. We hope it inspires other teachers and students to make reconstruction history visible. 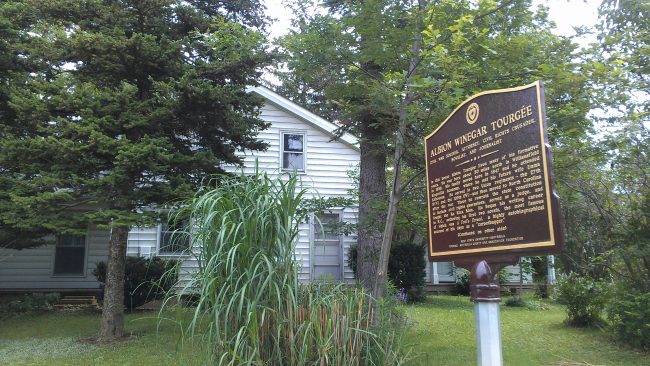 Albion Tourgee marker, located about a half a mile south of the Ohio State Route 193 and the “Kingsville” exit located off of Interstate I-90.

This was a student-led project for a course that I taught in 2014 at Kent State University-Ashtabula Sociology Department on social justice in the United States.

While this was a student-led project, there were a number of persons who played a part in recognizing important persons within the history of Ashtabula County. Principal to the idea was Judge Alfred Mackey, an Ashtabula County Court of Common Pleas Judge, and local historian. In honor of Ashtabula County’s 200th anniversary to occur in 2011, Judge Mackey came up with the idea of honoring significant persons who played a role in social justice issues from our County. The Ashtabula County Bar Association accepted the idea, and hired an artist by the name of Dan Bridy to commission artwork honoring the lives of persons such as famed early abolitionists, Joshua R. Giddings and Benjamin F. Wade. Judge Mackey was an admirer of famed attorney, Clarence Darrow, who had significant roots in our area. After these first three persons were honored, I played an unimportant role along with Judge Mackey to expand our list to include Judge Florence E. Allen, Judge Thomas Lambros, and Merle McCurdy. At that point, our Ashtabula County Bar Association felt that the project was “done.”

In 2014, I was contacted by a librarian from Kingsville, Ohio, Mariana Branch, asking why our Bar Association failed to honor Albion Tourgee. In all honesty, no one within our Bar Association had ever heard about Albion Tourgée. However, Mariana gave us the name of a gentleman, Howard Crosby, who was the long-term owner of Tourgee’s boyhood home. Mr. Crosby was in ill health, and he desired to have some sort of historical marker placed at his home before he passed away. It was at that time, while designing a class to teach at Kent State-Ashtabula, that I determined to have students research the life of Tourgée.

Four students were assigned this particular project: Katelyn Sackett, Greg King, Ryan Lee, and Justin Lillie. They took the project to heart, even travelling in a snowstorm to Tourgee’s final home, resting place, and library in Western New York to perform original research. Despite the fact that the New York Thruway was closed, this group of students pressed on utilizing secondary roadways to reach their destination. They wrote a significant paper from this research, the result of which was utilized by the Ashtabula County Bar Association to create the artwork honoring the life of Tourgée. 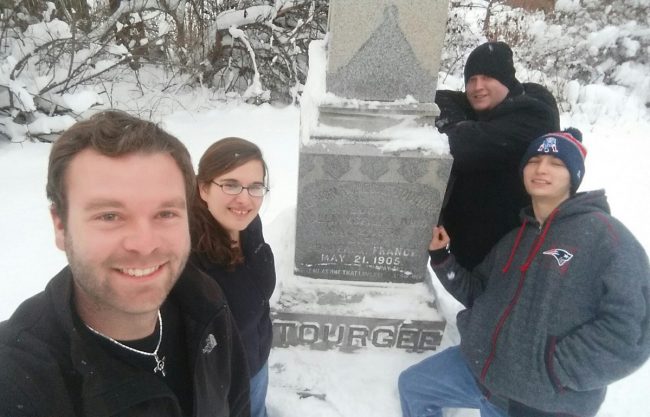 Albion Winegar Tourgée (1838-1905), was born in Williamsfield, Ohio in 1838, and obtained his education at the Kingsville Academy.  During the Civil War, Tourgée helped to form the 105th Ohio Volunteer Infantry where he served as a 1st Lieutenant.

Following the Civil War, he moved to North Carolina, where he helped to rewrite that State’s Constitution to included Civil Rights guarantees while also providing for a free public education, modeled after Ohio’s educational system.  He was later elected as a North Carolina superior court judge where he permitted African Americans to participate in Court proceedings both as litigants and jurors. He would eventually be forced from office upon the ever-increasing presence of the Ku Klux Klan who began to threaten his life.

Tourgée would return to the North and become a best-selling author writing accounts of the reforms attempted in the South during Reconstruction and its after-effects.

In 1896, Tourgee was the lead attorney for Homer Plessy in the infamous Supreme Court case, Plessy v. Ferguson, in which he argued that our Constitutional ideals are “color blind.” While Tourgée lost the case, in a ruling that formed the basis for segregation, his ideals would finally be adopted 58 years later in the case of Brown v. Board of Education of Topeka. 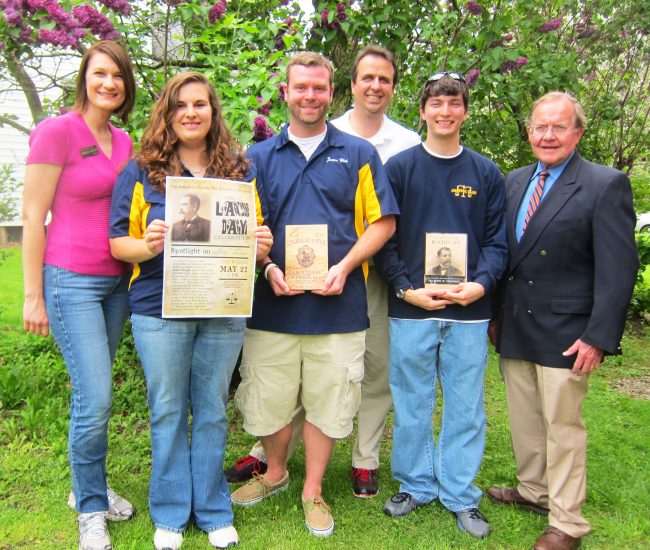 In May of 2015, my students led a “Law Day Program” for the Ashtabula County Bar Association to Albion Tourgée. To mark the event, in addition to the artwork by Dan Bridy, the students also worked with Professor Carl Denbow from Ohio University to make Howard Crosby’s dream a reality; placing a historical marker at the location of Tourgée’s boyhood home in Kingsville.

The Justice Club at KSU-A and the Ashtabula County Bar Association raised the funds for the marker. Based on time constraints in place within a 14-week class, and Mr. Crosby’s stated wishes before his passing, the time involved to make this a “official” State of Ohio historical marker was not feasible. However, the marker was cast from the original bronze utilized to make Ohio’s official markers at a foundry located in Marietta, Ohio. The Marker holds the seal for the Student’s alma mater, Kent State University, reflecting the work of these students and the fundraising efforts of the KSU-A Justice Club.

The marker was installed on May 21, 2015, corresponding with the 110th anniversary of Tourgée’s death. Unfortunately, Mr. Crosby was too ill to attend the Law Day Event. However, he was able to see his vision become a reality, with the installation of this historical marker at his residence shortly before his death. The students, with some help from their professor, also secured the appearance of the nation’s leading scholar on the life of Tourgée, Professor Mark Elliott from the University of North Carolina-Greensboro. We were also joined by Kent State Professor Bradly Keefer who appeared in a Civil War uniform to honor this hero in U.S. history. At the end of the program, the students were honored by Ashtabula County Commissioner Peggy Carlo for their efforts in bringing the life, legacy, and significant accomplishments of Tourgee back into the memory of the citizens of Ashtabula County. The Law Day Program can be viewed online.

Mark Elliott’s comments in the video show examples of how Tourgée is referred to in the South, in stark contrast to the new Kingsville Marker. It also helps to explain why these extremely brave heroes from the Reconstruction era are largely lost to history in today’s society. Their stories are as relevant as they were over 150 years ago, maybe even more important at this juncture in our nation’s history.

Below is a slide show with photos from the project. 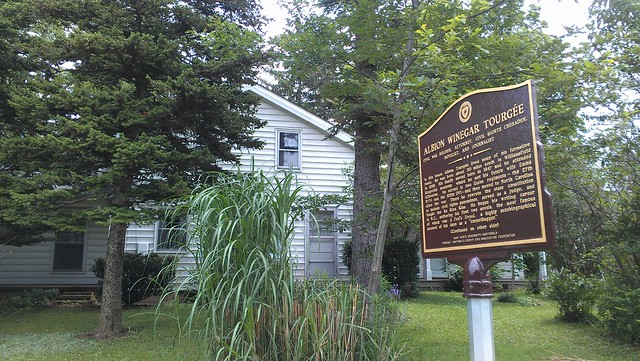 Here is a list of all seven people who were honored by the Ashtabula County Bar Association and whose portraits are displayed in Jefferson High School.

Joshua Reed Giddings (1795-1864), attorney from Jefferson, Ohio, served in the U.S. House of Representatives from 1838-1859, and was an ardent abolitionist. Giddings belief that all persons were created equal extended not only to ending slavery, but to granting African-Americans the right to vote, ideals expressed at a time when such views led to Giddings’ censure from Congress and threats on his life.

Benjamin Franklin Wade (1800-1878), attorney from Jefferson, Ohio, served in the United States Senate from 1851 until 1869. As President Pro Tem of the Senate, he came within one vote of becoming the President of the United States during Andrew Johnson’s impeachment trial in 1868. A fervent abolitionist, Wade fought strongly and publicly for both African-Americans and women to gain the right to vote, views that may have cost him the Presidency.

Albion Winegar Tourgée (1838-1905), attorney/author born in Williamsfield, Ohio, served in the Civil War for the 105th OVI. He helped to rewrite the North Carolina Constitution to include Civil Rights guarantees. He was later elected as a judge in North Carolina where he fought the rise of the Ku Klux Klan, and was one of the best-selling authors of his generation describing racial tensions in the South after reconstruction. In 1896, Tourgée was the lead attorney for Homer Plessy in the infamous Supreme Court case, Plessy v. Ferguson, in which he argued that our Constitutional ideals are “color blind.” Read more: Letter to President Theodore Roosevelt from Albion Tourgée | North Carolina History Project profile | Doc South profile and links to read both Tourgée’s novels online

Clarence Seward Darrow (1857-1938), was born in Kinsman, Ohio, and opened his first law office in Andover, Ohio, later serving as City Solicitor for the City of Ashtabula, and arguing cases in the Ashtabula County Courthouse. In 1888, he would move to Chicago, and go on to argue some of the biggest cases of the twentieth century, including the Leopold and Loeb murder trial and the Scopes Monkey Trial.

Florence Ellinwood Allen (1884-1966), was born in Salt Lake City, Utah, but educated in Ashtabula County at the New Lyme Institute. A leader in the Women’s Suffrage Movement, in 1920 she was elected to the Cuyahoga Court of Common Pleas, the first Woman elected to our Judicial Branch of Government. In 1922, she was elected to the Ohio Supreme Court, and in 1934, Franklin Delano Roosevelt appointed her to the Sixth Circuit Court of Appeals, all firsts for women. Learn more.

Merle M. McCurdy (1913-1968), the great-great-grandson of a former slave, was born and raised in Conneaut, Ohio. A brilliant litigator, McCurdy was the first Cuyahoga County Public Defender and the first African American, appointed by President John F. Kennedy, to serve as U.S. Attorney for the Northern District of Ohio. In 1967, he served as General Counsel for the Kerner Commission investigating the cause of racial tensions in America. Learn more.

J. J. Cornelius and his classmates at Franklin Middle School in Thief River Falls, Minnesota, researched the history of Reconstruction that gets short shrift in their state history textbook. They found lots of stories of note and drafted text for markers to place at significant sites.